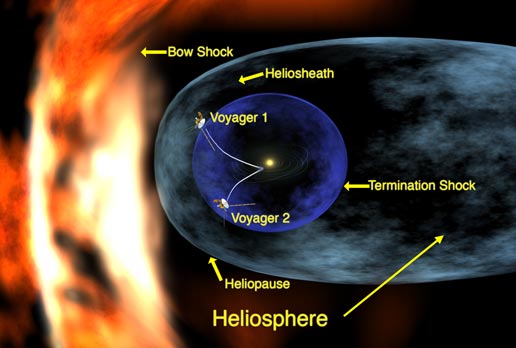 To envision the Sun's presence in the Milky Way galaxy, think of a ship plowing through the ocean, being tossed by currents. As the ship sails ahead, a bow shock spreads around the vessel.

The area under the Sun's influence, stretching well beyond the planets and forming what's called the heliosphere, is like a ship. The outer edges of the heliosphere are gently buffeted by interstellar wind, the gas and dust between the stars. As the Sun orbits the center of the Milky Way galaxy, the heliosphere moves as well, creating a bow shock ahead of it in interstellar space.

Termination Shock:
Blowing outward billions of kilometers from the Sun is the solar wind, a thin stream of electrically charged gas. This wind travels at an average speed ranging from 300 to 700 kilometers per second (700,000 - 1,500,000 miles per hour) until it reaches the termination shock. At this point, the speed of the solar wind drops abruptly as it begins to feel the effects of interstellar wind.

Heliosphere:
The solar wind, emanating from the Sun, creates a bubble that extends far past the orbits of the planets. This bubble is the heliosphere, shaped like a long wind sock as it moves with the Sun through interstellar space.

The heliosheath is just beyond the termination shock, the point where the solar wind slows abruptly, becoming denser and hotter. The solar wind piles up as it presses outward against the approaching wind in interstellar space.

Bow shock:
As the heliosphere plows through interstellar space, a bow shock forms, much as forms in front of a boulder in a stream.

Voyager 2:
Voyager 2 has visited more planets than any other spacecraft, swinging by Jupiter, Saturn, Uranus and Neptune. Voyager 2 was deflected downward by Neptune and is heading southward below the plane of the planets. With a somewhat lower speed than Voyager 1, it is about eighty percent as far from the Sun.

Voyager 1:
Voyager 1 is the most distant human-made object in the universe, At the beginning of 2005, the spacecraft was about 94 times as far from the Sun as is Earth. It was deflected northward above the plane of the planets' orbits when it swung by Saturn in 1980 and is now speeding outward from the Sun at nearly one million miles per day, a rate that would take it from Los Angeles to New York in less than four minutes. Long-lived nuclear batteries are expected to provide electrical power until at least 2020 when Voyager 1 will be more than 13 billion miles from Earth and may have reached interstellar space.