Ulysses Catches Record for Catching Comets by Their Tails
When it was launched 17 years ago, scientists and mission engineers for the Ulysses project knew they should expect, well, the unexpected. After all, the joint NASA/European Space Agency-managed spacecraft was going where no spacecraft had gone before - above and below the sun's poles. But the surprises the team expected were wholly in the area of solar research - which would make sense, as the primary mission of the Ulysses spacecraft is to characterize the sun and its influence on the space environment. That was before the spacecraft met up with some of the solar system's most mysterious and beautiful deep-space nomads.

"Ulysses has flown through and acquired data from the tails of comets on three separate occasions," said Edward J. Smith of NASA's Jet Propulsion Laboratory in Pasadena, Calif. Smith serves as the U.S. project scientist for the Ulysses mission. "No other spacecraft in history has done that." 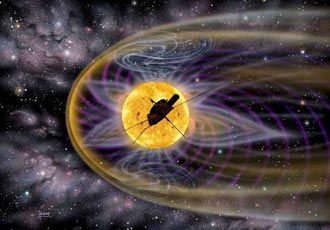 Ulysses' first cometary tail encounter occurred in 1996. Back then, comet Hyakutake was dazzling scientists and the public alike with its noteworthy appearances in the nighttime spring sky. On May 1, 1996, while Ulysses was cruising through space studying the solar wind, its data suddenly went wild for a few hours.

"As we were not looking for comets, we did not realize the significance of the data right away," said Smith. "The solar wind seemed to almost disappear and was replaced by gases not normally found in the solar wind, and the magnetic field in the solar wind was distorted."

At the time of the unexpected encounter, Ulysses was hundreds of millions of miles from comet Hyakutake and far beyond the visible tail. As their analysis began ruling out other possibilities, the science team came to a startling conclusion - Hyakutake's tail extended more than 480 million kilometers (300 million miles, or three times the distance from Earth to the sun), making it the longest comet tail ever recorded.

The once-in-a-lifetime chance encounter with a comet tail happened again in 2004 when Ulysses flew through the ion tailings of comet McNaught-Hartley. Unlike Hyakutake, comet McNaught-Hartley seemed to be at the wrong location for Ulysses to intercept its tail. By chance, an eruption of particles from the surface of the sun, called a coronal mass ejection, carried cometary material to Ulysses. Such a collision has recently been observed for the first time by NASA's Stereo spacecraft (http://www.nasa.gov/mission_pages/stereo/news/encke.html). A movie (http://www.nasa.gov/mpg/191284main_encke_scienceatnasa.mpg) shows the disruption and reformation of periodic comet Encke's tail.

Ulysses racked up its third, and perhaps most scientifically revealing, comet tail encounter this past February when it again flew through the ion tailings of a comet named McNaught (a different comet than the one encountered in 2004, but discovered by and named after the same astronomer). The nucleus of this comet McNaught was some 257 million kilometers (160 million miles) from the spacecraft during encounter. Ulysses' solar wind ion composition spectrometer instrument, developed by University of Michigan heliophysicist George Gloeckler, found that even at such a great distance, the tail had filled the solar outflow with unusual gases and molecules. In response, the solar wind that usually measures about 700 kilometers per second (435 miles per second) at that distance from the sun, was less than 400 kilometers per second (249 miles per second) inside the comet's tail, as measured by one of Ulysses' instruments called "Solar Wind Observations Over the Poles of the Sun."

The interaction between comets' tails and the solar wind has been studied for decades. A comet's ion tail always points away from the sun, whether the body is traveling toward or away from the sun along the comet's elliptical orbit. It was this finding that eventually led in 1958 to the discovery of solar wind. The magnetism and velocity of the solar wind are so strong, the effect pushes the comet's tail forward. A paper on Ulysses' latest crossing of a comet tail was published in the Oct. 1 issue of Astrophysical Journal.

"I recall saying a few years back that the odds that Ulysses' flight path would intersect that of a comet tail were probably less likely than finding a needle in a haystack," said Smith. "Now that we have encountered three, I cannot help wondering when nature will have another one in store for us."

Smith is part of an international science team that has been working Ulysses data since its 1990 launch from the payload bay of Space Shuttle Discovery. Ulysses scans the sun's magnetic field, solar plasmas, solar radio noise, energetic particles, galactic cosmic rays and cosmic dust between the poles and the equator - imparting a more complete perspective of the sun's atmosphere. Understanding Earth's nearest star and its processes is of paramount importance, as the space weather created by the sun has a huge effect on the third rock from it and its inhabitants. The sun's gaseous outer atmosphere can create huge space storms. This violent space weather, in turn, can affect Earth's electrical grid, cell phone communications, satellite functioning, and the operation of astronauts in orbit.

"Such unique science is a tribute to the durability of the mission and the intellectual curiosity of our science team," said Ed Massey of JPL, who serves as Ulysses' NASA project manager.

More information about NASA's Ulysses mission is available at http://ulysses.jpl.nasa.gov .