NASA Spacecraft Reveals Surprising Anatomy Of A Comet
Findings from a historic encounter between NASA's Stardust spacecraft and a comet have revealed a much stranger world than previously believed. The comet's rigid surface, dotted with towering pinnacles, plunging craters, steep cliffs, and dozens of jets spewing violently, has surprised scientists. 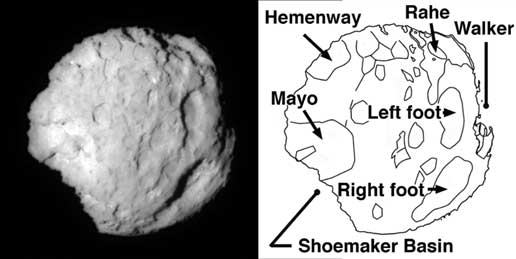 Image above: This image and diagram show the comet Wild 2, which NASA's Stardust spacecraft flew by on Jan. 2, 2004. The picture on the left is the closest short exposure of the comet. The listed names on the right are those used by the Stardust team to identify features. "Basin" does not imply an impact origin.
+ Click for full image. Image credit: NASA/JPL-Caltech.

Animation: This movie strings together a series of still images of comet Wild 2 taken during Stardust's historic flyby of the comet. + Click for animation. Animation credit: NASA/JPL-Caltech.

"We thought Comet Wild 2 would be like a dirty, black, fluffy snowball," said Stardust Principal Investigator Dr. Donald Brownlee of the University of Washington, Seattle. "Instead, it was mind-boggling to see the diverse landscape in the first pictures from Stardust, including spires, pits and craters, which must be supported by a cohesive surface."

Stardust gathered the images on Jan. 2, 2004, when it flew 236 kilometers (about 147 miles) from Wild 2. The flyby yielded the most detailed, high-resolution comet images ever.

"We know Wild 2 has features sculpted by many processes. It may turn out to be typical of other comets, but it is unlike any other type of solar system body," Brownlee said. He is lead author of one of four Stardust papers appearing in the Fri., June 18, issue of Science. "We're fortunate that nature gave us such a rich object to study."

Stardust images show pinnacles 100 meters tall (328 feet), and craters more than 150 meters deep (492 feet). Some craters have a round central pit surrounded by ragged, ejected material, while others have a flat floor and straight sides. The diameter of one large crater, called Left Foot, is one fifth of the surface of the comet. Left Foot is one kilometer (.62 miles) across, while the entire comet is only five kilometers (3.1 miles) across. 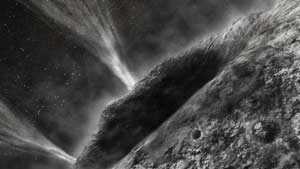 Image left: This is an artist's concept depicting a view of comet Wild 2 as seen from NASA's Stardust spacecraft during its flyby on Jan. 2, 2004. + Click for full image. Image credit: NASA/JPL-Caltech.

"Another big surprise was the abundance and behavior of jets of particles shooting up from the comet's surface. We expected a couple of jets, but saw more than two dozen in the brief flyby," said Dr. Benton Clark, chief scientist of space exploration systems, Lockheed Martin Space Systems, Denver.

The team predicted the jets would shoot up for a short distance, and then be dispersed into a halo around Wild 2. Instead, some super-speedy jets remained intact, like blasts of water from a powerful garden hose. This phenomenon created quite a wild ride for Stardust during the encounter.

"Stardust was absolutely pummeled. It flew through three huge jets that bombarded the spacecraft with about a million particles per second," said Thomas Duxbury, Stardust project manager at NASA's Jet Propulsion Laboratory, Pasadena, Calif. Twelve particles, some larger than a bullet, penetrated the top layer of the spacecraft's protective shield.

The violent jets may form when the Sun shines on icy areas near or just below the comet's surface. The solid ice becomes a gas without going through a liquid phase. Escaping into the vacuum of space, the jets blast out at hundreds of kilometers per hour.

The Stardust team theorizes sublimation and object hits may have created the comet's distinct features. Some features may have formed billions of years ago, when life began on Earth, Brownlee said. Particles collected by Stardust during the Wild 2 encounter may help unscramble the secrets of how the solar system formed.

Stardust was launched in 1999. It is zooming back to Earth with thousands of captured particles tucked inside a capsule. The capsule will make a soft landing in the Utah desert in January 2006. The samples will be analyzed at the planetary material curatorial facility at NASA's Johnson Space Center, Houston.

Comets have been objects of fascination through the ages. Many scientists believe they delivered carbon and water, life's building blocks, to Earth. Yet their destructive potential is illustrated by the widely held theory that a comet or asteroid wiped out the dinosaurs.

To view Stardust images on the Internet, visit: http://stardust.jpl.nasa.gov or http://photojournal.jpl.nasa.gov/