Have you ever noticed how some things just keep getting smaller and smaller? Take our cell phones or personal computers for example. Just a few years ago it would have been impossible to conveniently tuck a cell phone away in a pocket or carry around a computer that weighs less than five pounds. Now NASA's Space Technology 5 (ST5) Project is building and testing three smaller satellites called micro-satellites. 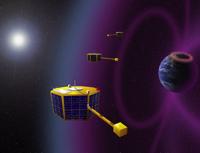 These micro-sats will test and validate new technologies for future science missions. The hope is that ST5 will demonstrate the benefits of a group of small low-cost spacecraft taking measurements at the same time in different locations. Building and testing of all three micro-sats is currently underway with launch scheduled for late February 2006 from Vandenberg Air Force Base (VAFB). ST5 is scheduled to operate in space for at least 90 days.

Miniaturized components and technologies are being built into each of the micro-sats. Each satellite weighs approximately 25 kilograms (55 pounds) when fully fueled and resembles a very large birthday cake at 53 centimeters (20.7 inches) across and 48 centimeters (18.7 inches) high. 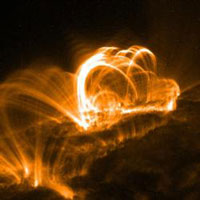 Image Left: This close-up view of an active region above a sunspot is from the Transition Region and Coronal Explorer (TRACE) spacecraft in September 2005. The Sun is always in motion, hurling solar flares and coronal mass ejections (CMEs) in to space. When directed at Earth, these blasts of radiation can affect satellites, communications, power grids, airlines, and astronauts in space. Click on image for animation. Also available: large still (207 Kb) | large movie (15.8 Mb). download high-resolution images. Credit: NASA/LMSAL.

"We are at a very exciting phase of the project with all three spacecraft assembled and under test. The entire ST5 team is looking forward to launch," said Ardeshir Azarbarzin, ST5 Project Manager.

Although small in size compared to other satellites, each of the ST-5 satellites is considered "full service," meaning they contain power, propulsion, communications, guidance, navigation, and control functions found in spacecraft that are much larger. And they have a rather tall mission: help scientists understand and map the intensity and direction of the Earth’s magnetic field, the magnetic "bubble" that surrounds and protects our planet.

Image Right: Engineers tested the three spacecraft to make sure they would properly deploy from this rack, called a Pegasus Support Structure (PSS). The PSS will rocket out of an airplane and launch the spacecraft one at a time like frisbees. More photos Credit: NASA.

Because they're so light, all three micro-sats will launch on the same rocket from a stacked position. The ST5 Project designed, built, and tested a new innovative Pegasus rack that will deploy each satellite like a spinning Frisbee. The rack will actually be deployed from a modified airplane, rather than launched on a rocket.

After launching, each of the micro-sats will be positioned in a "string of pearls" constellation, meaning they'll be about 40-140 km (about 25-90 miles) apart and still be able to do their scientific experiments without interfering with each other. With the help of groundbreaking missions like ST5, NASA hopes that in the future, scientists will be able to accurately forecast space weather and minimize its harmful effects on space and ground-based systems. In particular, this type of measurement is useful for missions that study the effect of the sun's activity on the Earth's magnetosphere. 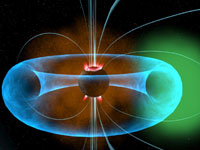 Image Left: When the solar blasts head toward Earth, they're filtered through Earth's protective magnetic fields, almost like a pinball. Some particles make it through the fields and interact with particles in our atmosphere to create colorful auroras. Click on image for animation or download high-resolution images. Credit: NASA.

With ST5 NASA will not only demonstrate new technologies, but also learn how to efficiently build multiple identical micro-sats and use them for scientific measurements. These new miniaturized components will help pave the way for flying anywhere from ten to hundreds of micro-sats in the future!

The ST5 Project is a part of NASA's New Millennium Program, which was created to identify, develop, build, and test innovative technologies and concepts for use in future missions. Its missions are guided by future needs of NASA's Earth and Space Science program.