Deep Roots of Solar Wind Help Predict Space Weather Across the Solar System
A layer deep in the solar atmosphere can be used to estimate the speed of the solar wind, a stream of electrified gas that constantly blows from the Sun. Estimating the speed of the solar wind will improve space weather forecasts, enhancing our ability to protect communications, navigation, and other satellites from the effects of solar storms. We will also be able to warn human explorers on their way to the planets of the severity of those storms.

This was unexpected because the solar wind originates in the corona, and the chromosphere is much deeper: it lies just above the Sun's visible surface. "It's like discovering that the source of the river Nile is another 500 miles inland," said Dr. Scott McIntosh of the Southwest Research Institute, Boulder, Colo., lead author of a paper on this research published May 10 in the Astrophysical Journal. 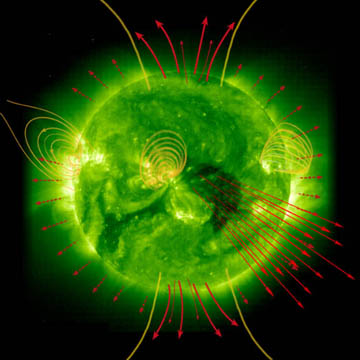 The new work promises to increase the accuracy of space radiation forecasts. The Sun occasionally launches billion-ton blasts of electrified gas, called coronal mass ejections (CMEs), into space at millions of miles (kilometers) per hour. If a fast CME is plowing through slow solar wind, a shock builds up in front of the CME that accelerates the electrically charged solar wind particles. These fast particles can disrupt satellites and are hazardous to unprotected astronauts.

"Just as knowing more details about the atmosphere helps to predict the intensity of a hurricane, knowing the speed of the solar wind helps to determine the intensity of space radiation storms from CMEs," said co-author Dr. Robert Leamon of L-3 Government Services at NASA's Goddard Space Flight Center, Greenbelt, Md.

In the new work, the team has tied the speed of the solar wind as it blows past Earth to variations deeper in the solar atmosphere than had previously been detected (or even expected). By measuring the time taken for a sound wave to travel between two heights in the chromosphere, they were able to determine that the chromosphere is effectively "stretched thin" below coronal holes with their open magnetic fields, but compressed below magnetically closed regions.

The team used the observation to derive a continuous range of solar wind speeds from the structure of the chromosphere. The wider the chromospheric layer is, the more it is being allowed to expand by open magnetic fields and the faster the solar wind will blow. This new method is more precise than the old "fast or slow" estimate. 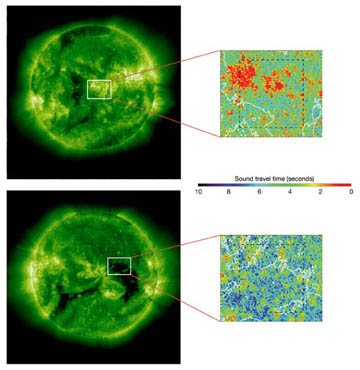 Image above: Sampling an area of the Sun's upper atmosphere (shown approximately by the white outlines on the full Sun images at left), McIntosh and Leamon used measurements made by NASA's TRACE spacecraft of a region with strong, closed magnetic fields on July 7, 2003 (top) and another region with weaker, open magnetic field on September 18, 2003 (bottom). The areas in red in the top "time difference" image show a shallow, dense chromosphere beneath an area with slow, dense solar wind outflow; the areas in blue in the bottom image show a deep, less dense chromosphere below a "coronal hole" with fast, tenuous solar wind outflow. Image Credit: Images on left from the SOHO Extreme ultraviolet Imaging Telescope - ESA/NASA; images on the right from The Astrophysical Journal - University of Chicago Press Click here for a 4.1 meg print-resolution copy of this image (tif format)

"Prior to this discovery, we could only determine solar wind speed from spacecraft that were roughly in line between the Earth and the Sun, like ACE, WIND, and the Solar and Heliospheric Observatory. This spacecraft fleet was placed along the Earth-Sun line because we need to know about the space weather coming our way. However, compared to the size of our solar system, this is a very narrow range; it's like looking through a soda straw. With this discovery, we can use TRACE to build up images that can predict the solar wind speed throughout half the solar system," said Dr. Joe Gurman, a solar researcher at NASA Goddard.