Solar 'Fireworks' Signal New Space Weather Mystery
The most intense burst of solar radiation in five decades accompanied a large solar flare on January 20, shaking space weather theory and highlighting the need for new forecasting techniques. The solar flare occurred at 2 a.m. ET, tripping radiation monitors all over the planet and scrambling detectors on spacecraft within minutes. It was an extreme example of a flare with radiation storms that arrive too quickly to warn future interplanetary astronauts. 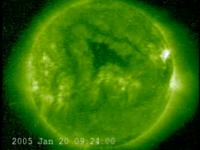 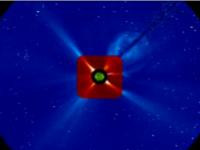 Images Above: After the first sign of the January flare, a storm of energetic protons impacted Earth just 15 minutes later as opposed to the usual timeline of a few hours. Left: The Extreme ultraviolet Imaging Telescope (EIT) instrument on SOHO shows the flare erupting, then the camera getting peppered by solar particles soon after. Right: SOHO's Large Angle and Spectrometric Coronagraph (LASCO) instrument blocks out the corona to watch the coronal mass ejection streaming out into space. Credit: NASA / ESA

"This flare produced the largest solar radiation signal on the ground in nearly 50 years," said Dr. Richard Mewaldt of the California Institute of Technology in Pasadena, a co-investigator on NASA's Advanced Composition Explorer (ACE) spacecraft. "But we were really surprised when we saw how fast the particles reached their peak intensity and arrived at Earth." 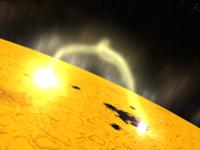 Image Left:Solar flares are caused by the solar magnetic field. In this animation, magnetic field lines stretch and twist over sunspots on the solar surface, storing energy that can be released as a flare when the lines "snap open." Click on image for animation or download print resolution stills. Credit: NASA/Walt Feimer

Normally it takes two or more hours for a dangerous proton shower to reach maximum intensity at Earth after a solar flare, but the particles from the January 20 flare peaked about 15 minutes after the first sign.

That's important," said Mewaldt, "because it's too fast to respond with much warning to astronauts or spacecraft that might be outside Earth's protective magnetosphere. In addition to monitoring the Sun, we need to develop the ability to predict flares in advance if we are going to send humans to explore our solar system."

The event also shakes current theory about the origin of proton storms at Earth. "Since about 1990, we've believed that proton storms at Earth are caused by shock waves in the inner solar system as coronal mass ejections plow through interplanetary space," says Professor Robert Lin of the University of California at Berkeley, principal investigator for the Reuven Ramaty High Energy Solar Spectroscopic Imager (RHESSI). "But the protons from this event may have come from the Sun itself, which is very confusing." 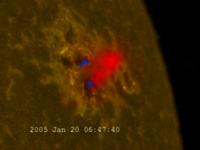 Image Right:The RHESSI data overlaid on a TRACE image shows gamma-rays (blue) and X-rays (red) thrown off by the hottest part of the flare. The gamma rays are made by energetic protons at the Sun. Credit: NASA

The origin of the protons is imprinted in their energy spectrum (as measured by ACE and other spacecraft), which matches the energy spectrum of gamma-rays thrown off by the flare (as measured by RHESSI). "This is surprising", says Lin, "because in the past we believed that the protons making gamma-rays at the flare were produced locally and the ones at the Earth were produced instead by shock acceleration in interplanetary space. The similarity of the spectra suggests that they are the same."

Solar flares and coronal mass ejections (CMEs), associated giant clouds of plasma in space, are the largest explosions in the solar system. They are caused by the buildup and sudden release of magnetic stress in the solar atmosphere above the giant magnetic poles we see as sunspots. The TRACE and the Solar and Heliospheric Observatory (SOHO) spacecraft are devoted to observing the Sun and identifying the root causes of flares and CMEs, with an eye toward forecasting them. 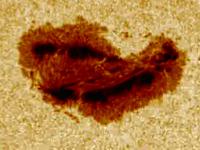 "We do not yet know how to predict the flow of energy into and through these large flares", says Dr. Richard Nightingale of the Lockheed Martin Solar and Astrophysics Laboratory in Palo Alta, Calif., "but instruments like TRACE give us new clues with each event we observe." TRACE has identified a possible source of the magnetic stress that causes solar flares. The sunspots that give off the very largest ("X-class") flares appear to rotate in the days around the flare. "This rotation stretches and twists the magnetic field lines over the sunspots", says Nightingale. "We have seen it before every X-flare that TRACE has observed since it was launched and more than half of all flares in that time." 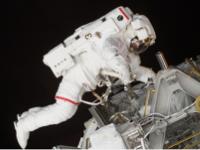 Image Right:Solar flares and CMEs are the largest explosions in the solar system. They are caused by the buildup and sudden release of magnetic stress in the solar atmosphere above the giant magnetic poles we see as sunspots. CMEs can cause magnetic storms affecting communication systems, power grids and astronauts in space. Credit: NASA

However, rotating sunspots are not the whole story. The unique flare came at the end of a string of five other very large flares from the same sunspot group, and no one yet knows why this one produced more sudden high energy particles than the first four.

"It means we really don't yet understand how the Sun works," says Lin, "and we need to continue to operate and exploit our fleet of solar-observing spacecraft to identify how it works."