The Quest to Predict the Next Space "Hurricane" Season
Violent solar events, like flares and coronal mass ejections, are the hurricanes of space weather, capable of causing havoc with satellites, power grids, and radio communication, including the Global Positioning System. The sun is heading into a new season of turbulent solar activity. Just like its seasonal hurricane predictions, on April 25, 2007, the National Oceanic and Atmospheric Administration (NOAA) will issue an update on efforts to predict the sun’s next solar cycle. The solar cycle is about 11 years long and marked by increases in the number of Earth-impacting solar storms and sunspots, dark areas on the sun caused by the intense, unstable magnetic fields that power fierce solar weather.

Radiation from severe space weather can be hazardous to astronauts as well as spacecraft, so NASA works closely with NOAA to develop better space weather predictions. NASA funded the expert panel developing the NOAA solar cycle prediction, and is sponsoring missions to improve the accuracy of space weather forecasts.

"NASA wants better short-term forecasts, so astronauts have enough warning to take cover in radiation-shielded areas during solar storms, and better long-term forecasts, so our flight dynamics experts can predict the orbital lifetime of satellites," said Dr. Dean Pesnell of NASA's Goddard Space Flight Center, Greenbelt, Md. Solar storms can heat the upper atmosphere, causing it to expand. The expansion makes the atmosphere denser at orbital altitudes, slowing down satellites and causing them to re-enter the atmosphere prematurely, if there is no fuel on board to give them a boost. Pesnell is serving on the NOAA solar cycle prediction panel.

Solar storms begin with tangled magnetic fields generated by the sun’s churning, electrically conducting gas (plasma). Like a rubber band that has been twisted too far, solar magnetic fields can suddenly snap to a new shape, releasing tremendous energy as a solar flare or a coronal mass ejection (CME).

Solar flares are explosions in the sun’s atmosphere, with the largest equal to billions of one-megaton nuclear bombs. Solar magnetic energy can also blast billions of tons of plasma into space at millions of miles (kilometers) per hour as a CME. This violent solar activity often occurs near sunspots, dark regions on the sun caused by concentrated magnetic fields. Sunspots and stormy solar weather follow the eleven-year cycle, from few sunspots and calm to many sunspots and active, and back again.

The latest NASA solar missions aim to track solar storms from their birth on the sun to their impact with Earth. Understanding how solar energy flows and interacts with Earth in more detail is key to improving space weather forecasts.

NASA's Solar Dynamics Observatory (SDO) is scheduled for launch in August 2008. It will take a closer look at the origin of solar storms. It will peer deep inside the sun, to where the solar magnetic field is generated. SDO will also see how magnetic energy is released by the solar atmosphere. By observing how solar magnetic energy is generated, structured, and released, SDO will improve our understanding of how solar storms develop.

NASA's STEREO mission will track solar storms in three dimensions. Launched on October 25, 2006, the twin Solar Terrestrial Relations Observatory spacecraft are orbiting the sun, one slightly ahead of Earth and one slightly behind, separating from each other by approximately 45 degrees per year. Just as the slight offset between your eyes provides you with depth perception, this separation of the spacecraft allows them to take 3-D images and particle measurements of the sun. 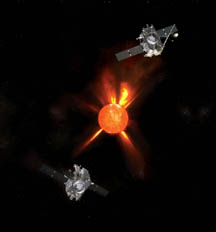 Image right: This is an artist's concept of the STEREO spacecraft. In reality, the spacecraft are much farther apart. Print-resolution copy Credit: NASA

NASA's THEMIS mission will also help improve the understanding of severe space weather effects on Earth. The THEMIS (Time History of Events and Macroscale Interactions during Substorms) mission will discover what causes intense displays of the aurora (northern and southern lights), called substorms. Just as severe thunderstorms are accompanied by hail and tornadoes, it is believed that some of the most intense space storms – the ones producing the most penetrating radiation – are accompanied by substorms. Meteorologists study tornadoes to understand severe thunderstorms, and space weather forecasters want to study substorms for insight into severe space storms. 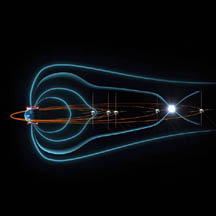 Image left: This is an artist's concept of the THEMIS main orbits, represented by red ovals. Blue lines represent the Earth's magnetic field. The white flash represents energy released during substorms. The THEMIS spacecraft will line up at midnight over the United States every four days. The distances range from about half the distance to the moon to about a sixth of the distance to the moon. This position will help scientists pinpoint exactly when and where substorms occur. Print-resolution copy Credit: NASA

Like the wind that comes with turbulent weather on Earth, the sun continuously blows a diffuse wind of plasma into space that can cause severe space weather. The solar wind interacts with Earth's magnetic field to generate substorms. A substorm acts like a slingshot: it is an abrupt release of stored solar wind energy in near-Earth space, signified by a sudden eruption of the aurora.

Substorms start from a small region in space but within minutes cover a vast area of the magnetosphere, the zone of space dominated by Earth's magnetic field. Their trigger has been a tantalizing, 30-year-old mystery - the Holy Grail of space physics. Different possible triggers have different locations, so the key to solving this mystery is finding the elusive substorm point of origin. Since the magnetosphere is huge, extending past the moon's orbit on Earth's night side, a single spacecraft is not enough to find the trigger.

Launched on February 17, 2007, THEMIS will resolve this mystery, utilizing coordinated measurements from a fleet of five satellites strategically placed in key positions in the magnetosphere. This is the largest number of scientific satellites NASA has ever launched into orbit aboard a single rocket.

Innovative missions like SDO, STEREO, and THEMIS promise to yield the breakthroughs in space weather prediction needed as our high-technology civilization becomes increasingly vulnerable to hurricanes in space.