Solar Storms: Nowhere to Hide from SOHO's Improved 'X-Ray Vision'
NASA researchers using the Solar and Heliospheric Observatory (SOHO) spacecraft have developed a method of seeing through the sun to the star's far side. The sun's far side faces away from the Earth, so it is not directly observable by traditional techniques.

Image/movie right: The movie shows the time around the "Halloween Flares" of 2003. In late October 2003 some very large active regions emerged - some on the far side and some on the front side - which contained some of the largest sunspots of the present cycle and which generated the largest flare of the cycle. The movie starts with the Sun as observed in white light - showing the sunspots rotating by. Then the viewer apparently "moves" to the left, around the east limb of the Sun, to peak at the far-side heliosiesmic activity maps. The movie shows regions coming from the back side (blue area) and rotating onto the front side (yellow area). Click image to view animation. (no audio-1 Mb) Credit: NASA, Tom Bridgeman

"This new method allows more reliable advance warning of magnetic storms brewing on the far side that could rotate with the sun and threaten the Earth," said NASA-supported scientist Phil Scherrer of Stanford University, Stanford, Calif.

Magnetic storms resulting from violent solar activity disrupt satellites, radio communications, power grids and other technological systems on Earth. Advance warning can help planners prepare for operational disruptions. The sun rotates once every 27 days, as seen from Earth, and this means the evolution of active regions on the far side of the sun previously has not been detectable.

The sun is filled with many kinds of sound waves caused by the convective (boiling) motion of gas in its surface layers. The far side imaging method compares the sound waves that emanate from each small region on the far side with what was expected to arrive at that small region from waves that originated on the front side. An active region reveals itself because its strong magnetic fields speed up the sound waves. The difference becomes evident when sound waves originating from the front side and from the back side get out of step with one another. 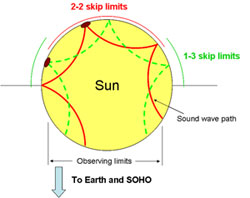 Image left: This diagram shows some sample sound wave paths connecting the front or Earth side of the Sun with the back or far side. Sound waves are generated by the boiling motion of gas in the Sun's surface layers, called convection. When California-sized convection cells called "granules" cool and fall back into the interior they cause sound waves to move into the Sun in all directions. This diagram shows the path of some of the waves from one of these cells starting on the front side. As the waves move into the Sun they get bent out back to the surface because the sound speed is higher deeper into the Sun. When they get to the surface they get reflected back into the Sun. When they get reflected, the surface layer moves and scientists are able to measure that movement. Click image to enlarge. Credit: Stanford University

The new observation method uses SOHO's Michelson Doppler Imager (MDI) instrument to trace sound waves reverberating through the sun to build a picture of the far side.

"The original far-side imaging method only allowed us to see the central regions, about one-quarter to one-third of its total area," Scherrer said. "The new method allows us to see the entire far side, including the poles." Scherrer started an effort to use the new method to create full far-side images from archived MDI data collected since 1996. The project was completed in December 2005.

Douglas Biesecker of the National Oceanic and Atmospheric Administration's Space Environment Center, Boulder, Colo., said, "With the new far side photo album going back to 1996, we can discover identifying characteristics of active regions. This will improve our ability to distinguish real active regions."

SOHO is a cooperative project between the European Space Agency and NASA.