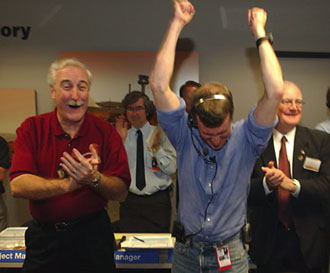 Saturday night saw a celebration worthy of a second New Year's Eve as NASA's Mars Exploration Rover Spirit reached the surface of Mars and signaled that it was safe and sound.

"This is a big night for NASA," said Administrator Sean O'Keefe. "We're back." O'Keefe opened a bottle of champagne and toasted the team at a press conference Saturday night.

Earlier, controllers had swung from anticipation to celebration, back to anxiety and then to jubilation as they watched data come in during the spacecraft's trying plunge through the Martian atmosphere. The chief engineer for entry, descent, and landing, Wayne Lee, gave a calm running commentary of landing events leading up to the bouncing touchdown. Jubilation gave way to tension as signals from Spirit alternately arrived at JPL or went absent during the landing, with Lee reassuring a NASA Television audience and 100 members of the global media that things were normal.

The telecast was also seen by more than 48,000 Internet users via a Webcast through the NASA Web portal.

Following Spirit's initial touchdown at 11:35 p.m. EST, sophisticated listening posts in the California desert and Australia scanned the skies for signals from the rover. Then, about 15 minutes after landing, transmission confirmation came back to JPL -- "Hey, we're on the planet," a JPL staff member boomed into a phone. It was the World Series, the Kentucky Derby, and the Super Bowl, only better, for the team who sweated this one out for so many months.

Being a member of the Mars team means, in part, becoming a Martian. Imagine living where each day lasts 40 minutes longer than 24 hours, wreaking havoc with your internal sense of time. That's the world scientists and engineers responsible for NASA's Mars rovers are operating in at California's Jet Propulsion Laboratory, adapting to Martian time.

Taking turns at round-the-clock shifts -- some in Earth time and others in Mars time -- since two rovers were launched last summer, the men and women of this Mars exploration team have used the past half-year while their robotic spacecraft have been bridging the distance between Earth and Mars to fine-tune the machines' software. Tending the rovers in transit, the team is giving them the best possible chance of making good on their mission to look for evidence of water in the red planet's past. The path to Mars is not straight -- as Mars continues to orbit the sun, the rovers follow an arc in space to intercept it.

As the sun faded on Earth Jan. 3, JPL team members were animated by their hopes and fears as the first rover, Spirit, had only hours remaining until it plunged into the thin Martian atmosphere at 12,000 miles an hour. That dramatic six-minute descent from space depended on a heat shield, a parachute, retro rockets, and finally a nest of gas-filled bags to protect the rover and its sensitive measuring instruments. With the light Martian gravity (only 38 percent of Earth's pull), the rover Spirit was expected to bounce as high as a four-story building, and keep rebounding across the barren Martian landscape for more than a half-mile before coming to rest.

"I hope to be able to breathe during those six minutes," one JPL team member told a media interviewer.

Dr. Ed Weiler, NASA's associate administrator for space science, insisted he is not superstitious, even as he acknowledged a personal ritual of wearing a tiny Hubble telescope lapel pin on each significant day of a space mission such as the voyage of the Mars Exploration Rovers.

During launch preparations, Weiler had characterized Mars as a graveyard for space probes. Fewer than one-third of the Mars vehicles launched by all nations sent data back to Earth. It's a tricky place to land; Mars has just enough atmosphere to create hazardous heat friction, but, unlike Earth, not enough atmosphere to slow a vehicle like the rover without the aid of retro rockets to modify its descent.

In the early years of American space exploration, when rudimentary facilities included concrete block buildings to shield launch staff in the event of an explosion on the launch pad, someone characterized the seconds before lift-off as "tense moments in the blockhouse". The saying caught on, and for a while, it was a catch phrase to describe anyone facing an uncertain outcome of any description. Sending probes across 300 million miles of deep space to a planet not yet fully understood warrants invoking this legacy phrase anew.

In the gathering California darkness on the eve of the first rover's landing, the JPL Spirit team invoked whatever it took to help make the landing a success while about 100 international media members huddled with them to listen for the first post-landing transmission.

The next chapter, the gathering of new science from Mars, begins now as photographic images are relayed; in about a week, the rover should be ready to venture forth on the surface of Mars.