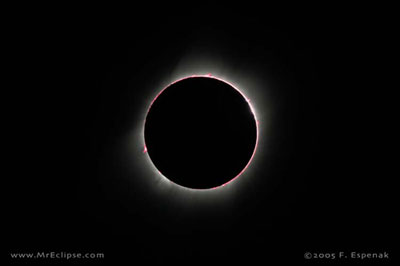 The chromosphere, a hot (20,000 F) layer of the Sun's atmosphere sandwiched between its surface and its outer atmosphere or corona, is visible in this image of a solar eclipse as a ruby red ring around the dark silhouette of the moon. The corona which is a million degrees is visible as the whispy white cloud around the moon. Image Courtesy Mr.Eclipse.com 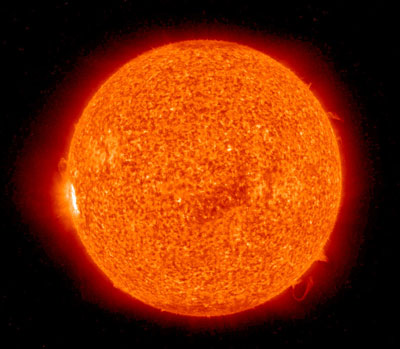 This movie was taken with one of NASA's new STEREO spacecraft. It shows the effect the dynamical chromosphere has on the transition region, as imaged in extreme ultraviolet emission emitted by Helium ions that are about 150,000 F. The limb of the Sun shows many prominences and spicules, thin jets that dominate the chromosphere.

Click image to view movie
This movie was taken by the SOHO satellite, a joint ESA/NASA mission. It shows how the spicules traverse thousands of miles in just a few minutes. Many of these jets fall back down to the Sun's surface. The images were taken in the same extreme ultraviolet light as the STEREO movie (150,000 F).

This movie was taken with a joint NASA/JAXA instrument onboard the recently launched Japanese Hinode satellite. This telescope acts as a miscroscope compared to STEREO and SOHO by providing the highest resolution images of the chromosphere ever taken from space, revealing details as small as 100 miles on the Sun. The movie was taken with a filter that sees only (blue) light emitted by singly ionized Calcium (20,000 F). Movies like this reveal how thin the spicules are, and how fast they shoot up and down through the Sun's atmosphere.

Magnetic field concentrations that are inclined from the vertical provide portals for the trapped waves to leak out and travel upward. Credit NSF

This movie was made with the Magneto-Optical filters at two Heights (MOTH) instrument funded by NSF and operated in Antarctica. Locations where the colors are green, yellow to red are so-called portals or gateways where extremely powerful sound waves leak from the Sun's interior into the chromosphere. These portals are formed when the magnetic field of the Sun tilts over enough to let the waves escape. The rapid twinkling of the colors shows the rapid opening and closing of the portals. It is caused by the continuous churning of the magnetic field concentrations on the solar surface. These fields are jostled around continuously by the turbulent convection ("boiling") of the surface.

This movie was made in light emitted by neutral hydrogen, which dominates the chromosphere, at the Swedish 1m Solar Telescope in La Palma, Canary Islands, Spain. It illustrates what happens to the sound waves once they escape through the portals: they form strong shock waves that accelerate and propel fountains of ionized gas upward into the Sun's atmosphere. These spicules are visible as thin dark pencil-like features that grow and shrink within a matter of minutes. The chromosphere is clearly dominated by these spicules, which appear at the limb (see the STEREO, SOHO and Hinode movies) as bright thin jets. For more information + The Swedish Solar Telescope at The Institute for Solar Physics, Royal Swedish Academy of Sciences

This movie was constructed using state-of-the art computer simulations that attempt to include all of the complicated physics that govern this region of the Sun. The movie shows a sideways view (the vertical direction is upwards on the Sun) of the temperature (top panel) and velocity (bottom panel) that occurs in the region of the Sun that covers the first few thousands of miles of the Sun's interior or convection zone, the surface of the Sun (photosphere), chromosphere and corona. The top panel illustrates how the hot corona (white region at the top, 2 million F) regularly is shot through with reddish jets (chromospheric temperatures of 20,000 F) that appear identical in length (a few thousand miles), width (a few hundred miles) and lifetime (a few minutes) as the ones we observe in our data (see Halpha movie). The bottom panel shows upward flowing gas in blue, and downward flowing gas in red. Using these simulations we can track the leakage of the sound waves, their transformation into shock waves (regions where blue and red almost touch) and further into spicules: the blue jets that shoot through the corona and turn red when they fall back down.