A Revealing Slant on Saturn's Rings

When Galileo viewed Saturn through his telescope about 400 years ago, he wrote that the gas giant planet had "ears." Those ears, elongated bulges on either side of the planet, were Saturn's rings. Galileo could not discern the rings through his small telescope. Today, amateur astronomers using small ground-based telescopes to professional astronomers using NASA's Hubble Space Telescope have gazed upon Saturn and its magnificent ring system. 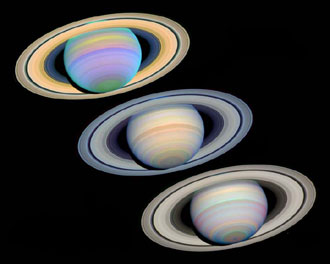 Image above: Saturn, as seen from NASA's Hubble Space Telescope. The top view is in ultraviolet, the middle is visible light, and the bottom is infrared.
Credit: NASA and E. Karkoschka (University of Arizona)

Saturn watchers are getting their best glimpse at Saturn's rings. That’s because every 15 years the rings are tilted 26 degrees toward Earth. These Hubble telescope snapshots capture this unique view, showing the planet's Southern Hemisphere and the southern face of its rings. As the planet continues its 29.5-year journey around the Sun, the plane of the rings changes in relation to Earth. In 2009 the rings will be invisible to Earth-bound telescopes, because they will be viewed edge-on. Not to worry. In 2017 Saturn watchers will get another great view of the ring system. That's when the planet's Northern Hemisphere and the northern face of its rings will be tipped toward Earth.

For more information about the image, please read the full story on the Hubble site.