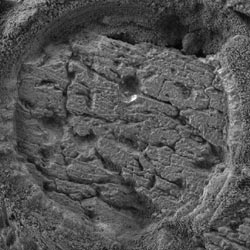 The abrasion tool successfully spun a wire brush late Monday to scrub dust off two patches of a rock inside "Endurance Crater," and engineering data received Tuesday confirmed that the tool is fully recovered. Rover wranglers at NASA's Jet Propulsion Laboratory, Pasadena, Calif., plan to use the tool's grinding rotor next to cut a hole exposing the interior of the rock.

"We're delighted to be using Opportunity's rock abrasion tool again," said Dr. Stephen Gorevan of Honeybee Robotics, New York, lead scientist for that tool on both rovers. "We had planned to kick out that pebble by turning the rotors in reverse, but just the jostling of the rover's movements seems to have shaken it loose even before we tried that. The rock abrasion tool has functioned beyond engineering expectations as a window for Mars Exploration Rover science. The new imaging consultation makes it clear that not only does the tool appear to be undamaged, but also that its teeth have not worn very much at all."

Opportunity and its twin, Spirit, have each conducted more than four months of bonus exploration and discoveries after successfully completing their three-month primary missions on Mars. Opportunity's rock abrasion tool has now been used 18 times to grind into rocks and five times to brush rocks. Spirit's tool has ground nine times and brushed 28 times. The criteria set in advance for successful use of the abrasion tools was for each rover to grind at least one rock.

Mars and Earth are approaching the point in their orbits when Mars, on Sept. 16, will pass nearly behind the Sun, a geometry called "conjunction." For several days around conjunction, the energetic environment close to the Sun will interfere with radio communications between the two planets. Rover operators have planned a hiatus in sending up daily commands. The rovers will use longer-term instructions to continue doing daily research and to attempt daily communications until the conjunction period is over.

"Based on experience with other spacecraft, we expect that when the Mars-Sun-Earth angle is 2 degrees or less, the ability to successfully communicate degrades rapidly," said JPL systems engineer Scott Doudrick, who has been organizing conjunction operations for both rovers. "To be cautious, we're allowing three days on either side of that period."

The planned gap in sending daily plans runs for about 12 days beginning Sept. 8 for Spirit and Sept. 9 for Opportunity. The rovers will be instructed ahead of time to continue doing atmospheric operations and Moessbauer spectrometer readings daily during that period. No movements of the wheels or the robotic arms are in the conjunction-period plans, but the camera masts may move for making observations. The rovers also will continue communicating daily with NASA's Mars Odyssey orbiter and will also attempt to communicate directly with Earth.

"The science team gets some time off from the daily planning cycle, but we will have a full spacecraft team every day, so we will be able to respond quickly if the rovers communicate a problem to us and there's a good reason for emergency commands," Doudrick said.

JPL, a division of the California Institute of Technology in Pasadena, manages the Mars Exploration Rover project for NASA's Science Mission Directorate, Washington. Additional information about the project is available from JPL at http://marsrovers.jpl.nasa.gov/ and from Cornell University, Ithaca, N.Y., at http://athena.cornell.edu .