NASA's Mars Rovers Roll Into Martian Winter
As winter approaches on Mars, NASA's Opportunity rover continues to inch deeper into the stadium-sized crater dubbed "Endurance." On the other side of the planet, the Spirit rover found an intriguing patch of rock outcrop while preparing to climb up the "Columbia Hills" backward. This unusual approach to driving is part of a creative plan to accommodate Spirit's aging front wheel. 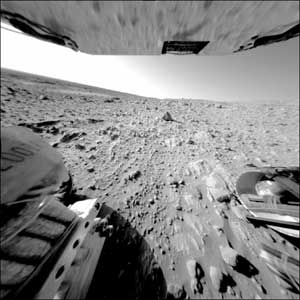 Image right: After months of traveling across a cratered plain, NASA's Mars Exploration Rover Spirit took this image of a large, continuous rock outcrop at "Columbia Hills." The rover drove over this area on its way to the north-facing slope of the hills, where it can look at such outcrop in more detail, using more solar power. + Click for full image. Image Credit: NASA/JPL.

Spirit, with an odometer reading of over 3.5 kilometers (2.2 miles), has already traveled six times its designed capacity. Its right front wheel has been experiencing increased internal resistance, and recent efforts to mitigate the problem by redistributing the wheel's lubricant through rest and heating have been only partially successful.

To cope with the condition, rover planners have devised a roundabout strategy. They will drive the rover backward on five wheels, rotating the sixth wheel only sparingly to ensure its availability for demanding terrain. "Driving may take us a little bit longer because it is like dragging an anchor," said Joe Melko, a rover engineer at NASA's Jet Propulsion Laboratory, Pasadena, Calif. "However, this approach will allow us to continue doing science much longer than we ever thought possible."

On Thursday, July 15, Spirit successfully drove 8 meters (26 feet) north along the base of the Columbia Hills backward, dragging its faulty wheel. The wheel was activated about 10 percent of the time to surmount obstacles and to pull the rover out of trenches dug by the immobile wheel. 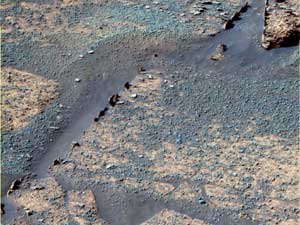 Image left: The pointy, ridged features in this image may only be a few centimeters high and less than 1 centimeter (0.4 inches) wide, but they have generated major scientific interest. Dubbed "Razorbacks," these chunks of rock stick up at the edges of rock slabs in "Endurance Crater." + Click for full image. Image credit: NASA/JPL/Cornell.

Along the way, Spirit drove over what scientists had been hoping to find in the hills -- a slab of rock outcrop that may represent some of the oldest rocks observed in the mission so far. Spirit will continue to drive north, where it likely will encounter more outcrop. Ultimately, the rover will drive east and hike up the hills backward using all six wheels.

"A few months ago, we weren't sure if we'd make it to the hills, and now here we are preparing to drive up into them," said Dr. Matt Golombek, a rover science-team member from JPL. "It's very exciting."

For the past month, the Spirit rover has been parked near several hematite-containing rocks, including "Pot of Gold," conducting science studies and undergoing a long-distance "tuneup" for its right front wheel.

Driving with the wheel disabled means that corrections might have to be made to the rover's steering if it veers off its planned path. This limits Spirit's accuracy, but rover planners working at JPL's rover test facility have come up with some creative commands that allow the rover to auto-correct itself to a limited degree.

As Spirit prepares to climb upward, Opportunity is rolling downward. Probing increasingly deep layers of bedrock lining the walls of Endurance Crater at Meridiani Planum, the rover has observed a puzzling increase in the amount of chlorine. Data from Opportunity's alpha particle X-ray spectrometer show that chlorine is the only element that dramatically rises with deepening layers, leaving scientists to wonder how it got there. "We do not know yet which element is bound to the chlorine," said Dr. Jutta Zipfel, a rover science-team member from the Max Planck Institute for Chemistry, Mainz, Germany.

Opportunity will roll down even farther into the crater in the next few days to see if this trend continues. It also will investigate a row of sharp, teeth-like features dubbed "Razorback," which may have formed when fluid flowed through cracks, depositing hard minerals. Scientists hope the new data will help put together the pieces of Meridiani's mysterious and watery past. "Razorback may tell us more about the history of water at Endurance Crater," said Dr. Jack Farmer, a rover science-team member from Arizona State University, Tempe.

Rover planners are also preparing for the coming Martian winter, which peaks in mid-September. Dwindling daily sunshine means the rovers will have less solar power and take longer to recharge. Periods of rest and "deep sleep" will allow the rovers to keep working through the winter at lower activity levels. Orienting the rovers' solar panels toward the north will also elevate power supplies. "The rovers might work a little bit more every day, or a little bit more every other day. We will see how things go and remain flexible," said Jim Erickson, project manager for the Mars Exploration Rover mission at JPL.

JPL, a division of the California Institute of Technology in Pasadena, manages the Mars Exploration Rover project for NASA's Office of Space Science, Washington.

Images and additional information about the project are available on the Internet at http://marsrovers.jpl.nasa.gov and http://athena.cornell.edu.