Mars Rover Surprises Continue; Spirit, Too, Finds Hematite
On challenging slopes that NASA's Mars rovers began exploring this month, both Spirit and Opportunity have found new surprises for the folks back home. 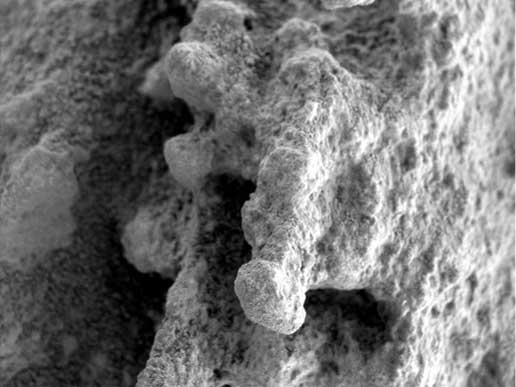 Image above: This close-up image taken by Spirit highlights the nodular nuggets that cover the rock dubbed "Pot of Gold." These enigmatic features appear to stand on the end of stalk-like projections. Data from the rover's scientific instruments has shown that Pot of Gold contains the mineral hematite, which can be formed with or without water. Scientists are planning further observations of that and other rocks in the area to determine this mineral's origin. + Click for full image. Image credit: NASA/JPL/Cornell/USGS.

Spirit rolled up to a knobby rock just past where the "Columbia Hills" start to rise from the surrounding plain. It touched the rock with a mineral-identifying instrument at the tip of its robotic arm and detected hematite. Hematite identified from orbit was NASA's key reason for choosing Opportunity's landing site halfway around Mars from these hills within Gusev Crater.

Opportunity, continuing its descent into "Endurance Crater," has found unexpected similarities between lower layers of rock it is examining for the first time and an overlying layer at "Eagle Crater" where, months ago, the rover discovered evidence that water once soaked the area.

"It's gratifying how well these machines keep performing, considering they've now nearly doubled their original three-month missions on Mars," said Chris Voorhees, rover mechanical systems engineer at NASA's Jet Propulsion Laboratory, Pasadena, Calif. By the end of next week, Spirit will have worked on Mars for half a year. It has driven more than three times the design requirement of one kilometer (0.6 mile). The only symptom of wear or aging on either rover so far is increased friction in one wheel on Spirit. The rover team at JPL is beginning to consider good sites for the solar-powered robots to spend the period of martian winter when reduced daily sunshine cuts power supply to a minimum. In the nearer term, though, team members are eager to follow through on the new scientific findings.

Spirit's hematite finding is in a rock dubbed "Pot of Gold," about the size of a softball. "This rock has a shape as if somebody took a potato and stuck toothpicks in it, then put jelly beans on the ends of the toothpicks," said Dr. Steve Squyres of Cornell University, Ithaca, N.Y., principal investigator for the rovers' science instruments. "How it got this crazy shape is anyone's guess. I haven't even heard a good theory yet."

Dr. Doug Ming, a rover science-team member from NASA's Johnson Space Center, Houston, said, "There's apparently some type of weathering, a removal of material, but we're still trying to determine whether it's by chemical or mechanical processes."

Further study of Pot of Gold could also help scientists assess what the hematite in it tells about past environmental onditions. "Hematite can form in a few different ways. Most of them require water, but it can also result from a dry, thermal oxidation process," Ming said. "It was hematite identified from orbit that made Meridiani Planum a compelling place to send Opportunity. There, we've learned that the hematite is indeed part of a water story. At Gusev we're just at the starting stage."

After examining Pot of Gold with the microscopic imager and two spectrometers on Spirit's arm, the rover backed away from the rock to re-approach at a better angle for using its rock abrasion tool to expose the rock's interior. In the rough and slippery terrain, that maneuver took several days. The Other nearby rocks may also be inspected before Spirit resumes longer drives exploring the Columbia Hills area. Also, engineers are planning an attempt to redistribute lubricant in Spirit's balky right front wheel before the rover leaves its current vicinity. 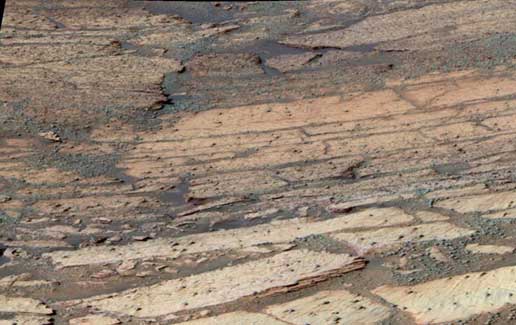 Image above: Opportunity is currently investigating the distinct layers of rockt hat make up this region in "Endurance Crater." + Click for full image. Image credit: NASA/JPL/Cornell.

Team members presented both rovers' status at a press conference at JPL today. Opportunity has driven far enough into the stadium-sized Endurance Crater to put it within arm's reach of three layers of rock beneath a sulfate-rich layer. That area is similar to what Opportunity first examined in the shallower "Eagle Crater," where it landed in January. "We're trying to systematically characterize the stratigraphy of the crater as we drive down, analyzing each unit chemically and mineralogically with all the instruments available," said Nicholas Tosca, a science-team affiliate from the State University of New York, Stony Brook. The first two newly accessed layers resemble the upper layer in having sulfate salts and spherical concretions; both are signs of formation of the rocks under wet conditions.

Squyres said, "I had thought we might see just basalt below the top salty layer, but instead it's salty as far as we've been able to see so far. Every time we see more sulfates as we work down this stack, it adds to the amount of water that was necessary to make this happen."

JPL, a division of the California Institute of Technology in Pasadena, manages the Mars Exploration Rover project for NASA's Office of Space Science, Washington, D.C. Images and additional information about the project are available from JPL at http://marsrovers.jpl.nasa.gov and from Cornell University, at http://athena.cornell.edu.