Cosmic Debate: What's Up With the Planets?
When kids head back to school this fall, they might have some brand new planets to memorize.

The International Astronomical Union, currently meeting in Prague, is expected to vote on the definition of a planet. The organization, which has named planets and moons since it was founded in 1919, is debating a plan to establish that our solar system has 12 planets. 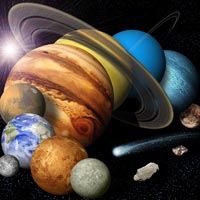 The designated dozen would include eight of the traditional nine -- Mercury, Venus, Earth, Mars, Jupiter, Saturn, Uranus, and Neptune -- plus Ceres, the largest known asteroid. Pluto would still be a planet, but in a category to be called "plutons." It would be joined in that category by two other planetary newcomers: Charon, formerly known as Pluto's moon, and the recently-discovered 2003 UB313. The International Astronomical Union says a dozen additional objects are under consideration for planethood, and even more may be added later on.

Since most of us grew up memorizing nine planets, this news of a shakeup in the solar system might be startling. In reality, a controversy has been brewing for years about whether Pluto is truly a planet or simply an icy remnant of the planet-formation process orbiting in the far reaches of our solar system. A new twist was added to the controversy in the summer of 2005, when Caltech astronomer Dr. Mike Brown and his colleagues announced they had found a "tenth planet," an object larger and more distant than Pluto. This object, temporarily dubbed 2003 UB313, is one of the new additions to the solar system under the International Astronomical Union proposal.

In essence, the organization is proposing that two conditions must be met for an object to be called a planet. It must orbit around a star, but must not be a star itself. And the object must be massive enough for its own gravity to pull it into a nearly spherical shape.

The definition of a planet will have implications reaching beyond our own solar system. In the past decade, astronomers have used new technologies to discover planets around other stars besides our sun. These so-called "extrasolar planets" have raised great interest among scientists, who hope to determine whether any of these planets might be habitable.

While scientists in Prague and throughout the world debate the question, "What is a planet," there's one thing most everyone can agree on: our view of the solar system will never be the same.