Scientists examining what NASA's Opportunity is showing them about Mars rocks are seeing into the past, and what they're seeing indicates water once flowed there. 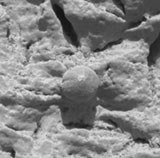 This image, taken by Opportunity's microscopic imager, shows a geological region of the rock outcrop at Meridiani Planum, Mars dubbed "El Capitan." Light from the top is illuminating the region. Several images, each showing a different part of this region in good focus, were merged to produce this view. The area in this image is 1.5 centimeters (0.6 inches) across. Image Credit: NASA/JPL/US Geological Survey

The outcrop right next to where Opportunity landed holds evidence that the rocks have spent time drenched in liquid water.

Members of the Mars Exploration Rovers' international science team presented that evidence to news reporters at NASA Headquarters in Washington on March 2.

"Liquid water once flowed through these rocks. It changed their texture, and it changed their chemistry," said Dr. Steve Squyres of Cornell University, Ithaca, N.Y., principal investigator for the science instruments on Opportunity and its twin, Spirit. "We've been able to read the tell-tale clues the water left behind, giving us confidence in that conclusion."

This mosaic of images taken by Opportunity's panoramic camera shows the rock region dubbed "El Capitan," which lies within the larger outcrop near the rover's landing site. Image Credit: NASA/JPL/Cornell

Dr. James Garvin, lead scientist for Mars and lunar exploration at NASA Headquarters, Washington, said, "NASA launched the Mars Exploration Rover mission specifically to check whether at least one part of Mars ever had a persistently wet environment that could possibly have been hospitable to life. Today we have strong evidence for an exciting answer: Yes."

This high-resolution image captured by Opportunity's panoramic camera highlights the puzzling rock outcrop near the rover's landing site. These layered rocks measure only 10 centimeters (4 inches) tall, about the height of a street curb.
Image Credit: NASA/JPL/Cornell

Clues from the rocks' appearance and composition support the conclusion that the rocks were altered by exposure to liquid water after they were formed. However, the clues don't tell how long the wet conditions lasted, and the clues are only tantalizing, not conclusive, about whether the environment was watery when the rocks originally formed.

This image, taken by the microscopic imager on Opportunity, illustrates the shapes of the vugs, or small cavities, located on the region dubbed "El Capitan." The region is part of the rock outcrop at Meridiani Planum, Mars, which the rover is currently examining. Image Credit: NASA/JPL/US Geological Survey

Opportunity arrived just five weeks ago at a carefully selected landing area within Mars' Meridiani Planum region. On landing day, it happened to roll to a stop inside a small crater that has an outcrop of bedrock. Most days since then, the rover has been surveying or inspecting the outcrop.

Scientists and engineers assembled at NASA's Jet Propulsion Laboratory in Pasadena, Calif., plan to keep Opportunity busy at the outcrop for several more days, perhaps gaining more evidence about whether the rocks were originally laid down in a wet setting, such as the bottom of a shallow lake or a hydrothermal hot spring. Later, the rover will venture out to the surrounding plain and may hunt for evidence putting the discoveries within the crater into a broader regional context.

Here are some of the clues that water formerly pervaded the rocks where Opportunity has been working:

-- The rover's alpha particle X-ray spectrometer found lots of sulfur in the outcrop. Related clues from that instrument and the miniature thermal emission spectrometer suggest the sulfur is in the form of sulfate salts, an indicator that the rocks were once soaked with water.

-- The rover's Moessbauer spectrometer detected jarosite, a hydrated iron sulfate mineral that could result from the target rock spending time in an acidic lake or acidic hot springs environment.

-- Pictures from Opportunity's panoramic camera and microscopic imager show many small, tablet-shaped or disc-shaped holes in an outcrop rock selected for close-up examination. These holes, or "vugs," match the distinctive appearance of Earth-rock vugs that form where crystals of salt minerals grow inside rocks that sit in briny water then disappear by eroding or dissolving.

-- The cameras have revealed spheres the size of BBs embedded in outcrop rocks. These spherules are not concentrated at particular layers within the rock, as they would likely be if they originated outside the rock and were deposited onto accumulating layers while the rock was forming. That makes the spherules likely to be concretions that formed from accumulation of minerals coming out of solution inside a porous, water-soaked rock.

-- Some of the spherules in pictures from the microscope appear to have stripes that correspond to layering of the matrix rock around them. This would be consistent with the interpretation that the spherules are concretions that formed inside a wet rock.

Opportunity is adding further observations in coming days to pursue other possible evidence about the rocks' water history, such as telltale patterns within the layering seen in the outcrop.