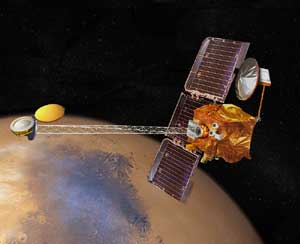 Like a sweet, older sibling standing quietly to the side as the baby of the family gets all the "ooh's" and "aah's," the 2001 Mars Odyssey orbiter has blended into the background noise of cheers for the Mars Exploration Rover discoveries. But Odyssey deserves her own praise and applause this Saturday as she reaches a major milestone. At 8:29 p.m. EDT (5:29 p.m. PDT) on May 22, 2004, Odyssey is scheduled to complete her 10,000th science mapping orbit around the red planet.

"You know, we often take big numbers for granted in the business of exploring space: light years of distance, terabytes of data, millions of pounds of thrust," said Gaylon McSmith, Mars Odyssey Science Office Manager. "Believe me, to the scientists of this project, 10,000 orbits and everything it took to achieve this milestone is truly a BIG number. Odyssey's science return has been outstanding and 10,000 orbits has provided an absolute treasure trove of information that will benefit researchers for many years to come." 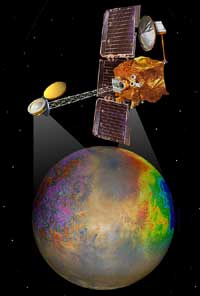 Odyssey was designed to make three major contributions to the understanding of Mars:

-- map chemical elements and minerals on the surface of Mars to find out what "Mars is made of"
-- look for water in the shallow subsurface
-- analyze the radiation environment to determine its potential effects on human health.

A Long Road to Success

Odyssey was launched from Cape Canaveral in Florida on April 7, 2001, and began its science mapping mission on February 19, 2002.

"It has been a long road getting to this point," explained Bob Mase, Mars Odyssey Mission Manager and former Navigation Lead. "We followed two spacecraft losses: the 1998 Mars Climate Orbiter and the Mars Polar Lander. After those failures, the pressure was on. We had to plan and re-plan."

The original Mars 2001 concept consisted of two spacecraft: an orbiter launching from Vandenburg Air Force Base in California and a four-legged lander that carried a small rover identical to the Sojourner rover that flew on Mars Pathfinder. But, following the Mars Climate Orbiter and Mars Polar Lander failures, the entire Mars Program as well as the Mars 2001 project were restructured to incorporate lessons learned. The project was re-planned several times and eventually ended up with just a single orbiter spacecraft. The spacecraft design was still changing in the final 12 months prior to launch. "It was an accomplishment just to get Odyssey to its new launch pad on the opposite side of the country in Florida!" said Mase.

Relief on meeting that deadline was short-lived. While the six-month, 286-million-mile (460-million-kilometer) cruise from Earth to Mars was largely uneventful, getting the spacecraft into orbit around Mars (Mars orbit insertion) was arduous from a personal perspective. One month prior to Mars orbit insertion, the 9/11 national tragedy shocked the nation and the team. The flight team at Jet Propulsion Laboratory in Pasadena, Calif., and their dedicated partners who operate the spacecraft from Lockheed Martin in Denver, Colo., put their heads down and forged ahead to achieve their goal of continuing America's legacy of peaceful exploration. Overcoming personal losses and concerns stemming from the 9/11 experience, the Odyssey team steadfastly prepared for arrival at Mars and the grueling aerobraking process, which would drag the spacecraft through the martian atmosphere to slow the spacecraft and bring Odyssey into its desired mapping orbit.

"Every one of our 332 dives into the volatile martian atmosphere carried the potential to burn us up," Mase explained. "Looking back on it, the current success makes it easy to forget the pressure we were under. The eyes of the world were upon us as a symbol of the American spirit, and the future of the Mars Program was on our shoulders as we were the first mission to return to Mars following two failures. The notion that 'you cannot fail' still echoes in my mind," said Mase.

Fail they did not, and are still making enormous contributions to current and future missions.

"The Mars Exploration Rover project wants to congratulate Odyssey on doing a tremendous job on both accomplishing their own science investigations and at the same time enabling Spirit and Opportunity to make significant scientific discoveries from the surface of Mars," said Richard Cook, Mars Exploration Rover former project manager. "Almost all of our data -- over 75% -- is coming down through the Odyssey relay, which is a testament to both the flexibility of the people on the project and to the capability of the design of the spacecraft."

"Odyssey's science return has been outstanding, and the entire team is eager to repeat this feat of 10,000 orbits numerous times in the years to come," said McSmith.

For more information about the mission, visit: http://mars.jpl.nasa.gov/odyssey/.

NASA's Mars Odyssey
› Back To Top