Image above: These time-lapse images of a newfound planet in our solar system, called 2003UB313, were taken on Oct. 21, 2003, using the Samuel Oschin Telescope at the Palomar Observatory near San Diego, Calif. The planet, circled in white, is seen moving across a field of stars. The three images were taken about 90 minutes apart.

Scientists did not discover that the object in these pictures was a planet until Jan. 8, 2005. Image credit: Samuel Oschin Telescope, Palomar Observatory
+ Highest resolution image available

Newest Member of Our Solar System 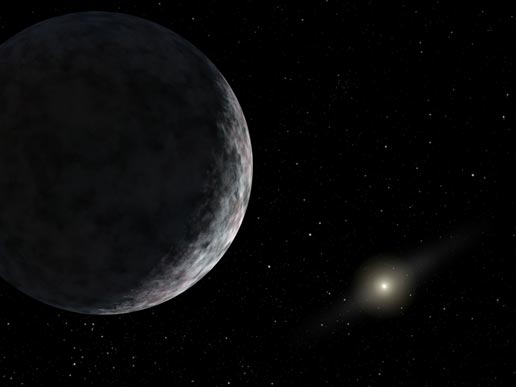 Image above: This artist's concept shows the planet catalogued as 2003UB313 at the lonely outer fringes of our solar system. Our Sun can be seen in the distance. The new planet, which is yet to be formally named, is at least as big as Pluto and about three times farther away from the Sun than Pluto. It is very cold and dark. The planet was discovered by the Samuel Oschin Telescope at the Palomar Observatory near San Diego, Calif., on Jan. 8, 2005. Image credit: NASA/JPL-Caltech
+ Larger image
› Back To Top