No Spring Picnic on Neptune 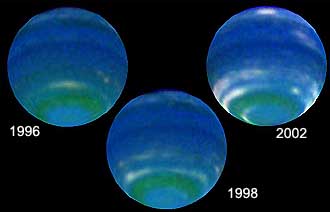 Imagine a spring in which flowers don't bloom, birds don't chirp, and children don't run outside to play. Welcome to Neptune.

Bring your parka. Neptune's springtime weather brings tempestuous storms, temperatures of minus 400 degrees Fahrenheit at the cloud tops, and ferocious winds that sometimes gust to 900 miles per hour. What is remarkable is that Neptune -- the farthest and coldest of the major planets -- exhibits any evidence of seasonal change. The Sun is 900 times dimmer than it is on Earth.

How can astronomers tell that springtime has arrived at all? Astronomers at the University of Wisconsin-Madison and NASA's Jet Propulsion Laboratory in Pasadena, Calif., used NASA's Hubble Space Telescope to study the planet, making three sets of observations over six years. The images reveal progressively brighter bands of clouds encircling the planet's southern hemisphere. Astronomers believe the cloud bands are getting brighter because the Sun is warming the atmosphere. Seasons are determined by the amount of sunlight each hemisphere receives at a given time.

Seasons on Neptune occur for the same reasons as on Earth. The seasonal changes on both planets occur because their axes tilt slightly. Earth is inclined 23.5 degrees. Neptune is tipped at an even greater angle: 29 degrees. As both planets travel around the Sun, their southern and northern hemispheres are alternately tipped toward or away from the Sun.

Unlike Earth, Neptune's seasons last for decades, not months. A single season on the planet, which takes almost 165 years to orbit the Sun, can last more than 40 years.

For more information, visit the Hubblesite.