A Warm South Pole? Yes, on Neptune!
PASADENA, Calif. -- An international team of astronomers has discovered that Neptune's south pole is much hotter than the rest of the planet. They have published the first temperature maps of the lowest portion of Neptune's atmosphere, which show that this warm south pole is providing an avenue for methane to escape out of the deep atmosphere.

"The temperatures are so high that methane gas, which should be frozen out in the upper part of Neptune's atmosphere, the stratosphere, can leak out through this region," said Glenn Orton of NASA's Jet Propulsion Laboratory, Pasadena, Calif. Orton is lead author of a paper appearing in the Sept. 18 issue of the journal Astronomy and Astrophysics. These findings were made using the Very Large Telescope, located in Chile, operated by the European Organization for Astronomical Research in the Southern Hemisphere (known as ESO). 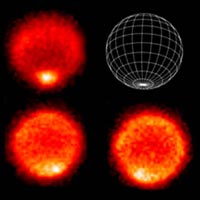 Image right: These thermal images show a "hot" south pole on the planet Neptune. These warmer temperatures provide an avenue for methane to escape out of the deep atmosphere.
Image credit: VLT/ESO/NASA/JPL/Paris Observatory
+ Browse version of image

Neptune, the farthest known planet of our solar system, is located about 30 times farther away from the sun than Earth is. Only about one thousandth of the sunlight received by our planet reaches Neptune. Yet, the small amount of sunlight Neptune does receive significantly affects the planet's atmosphere.

The astronomers found that these temperature variations are consistent with seasonal changes. A Neptunian year lasts about 165 Earth years. It has been summer in the south pole of Neptune for about 40 years now, and they predict that as winter turns to summer at the north pole, an abundance of methane would leak out of a warm north pole in about 80 years.

"Neptune's south pole is currently tilted toward the sun, just as the Earth's south pole is tilted toward sun during summer in the southern hemisphere," explains Orton. "But on Neptune the antarctic summer lasts 40 years instead of a few months, and a lot of solar energy input during that time can make big temperature differences between the regions in continual sunlight and those with day-night variations. This is a likely factor in Neptune having the strongest winds of any planet in the solar system; sometimes, the wind blows there at more than 2,000 kilometers per hour [1,240 miles per hour]," said Orton.

The new observations also reveal mysterious high-latitude "hot spots" in the stratosphere that have no immediate analogue in other planetary atmospheres. The astronomers think this feature was generated by upwelling gas from much deeper in the atmosphere.

Methane is not the primary constituent of Neptune's atmosphere, which, as a giant planet, is mostly composed of the light gases, hydrogen and helium. But it is the methane in Neptune's upper atmosphere that absorbs the red light from the sun and reflects the blue light from the sun back into space, making Neptune appear blue.

The new results were obtained with the Very Large Telescope and spectrometer for the mid-infrared, operated by the European Organization for Astronomical Research in the Southern?Hemisphere (known as ESO).

In addition to Orton, the team of astronomers includes C?dric Leyrat and A. James Friedson of JPL; Therese Encrenaz of Laboratoire d'Etudes Spatiales et d'Instrumentation en Astrophysique, Paris, France; and Richard Puetter of the Center for Astrophysics and Space Sciences, University of California, San Diego; and Eric Pantin, of the Centre d'Etudes Atomiques.