New Map Provides More Evidence Mars Once Like Earth
NASA scientists have discovered additional evidence that Mars once underwent plate tectonics, slow movement of the planet’s crust, like the present-day Earth. A new map of Mars’ magnetic field made by the Mars Global Surveyor spacecraft reveals a world whose history was shaped by great crustal plates being pulled apart or smashed together. 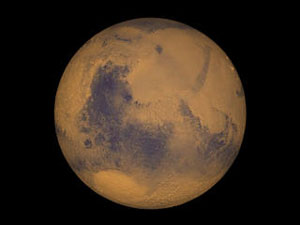 Image to right: True color image of the planet, Mars. Click on image to view movie of a flyby around Mars. Credit: NASA

Scientists first found evidence of plate tectonics on Mars in 1999. Those initial observations, also done with the Mars Global Surveyor’s magnetometer, covered only one region in the Southern Hemisphere. The data was taken while the spacecraft performed an aerobraking maneuver, and so came from differing heights above the crust.

This high resolution magnetic field map, the first of its kind, covers the entire surface of Mars. The new map is based on four years of data taken in a constant orbit. Each region on the surface has been sampled many times. “The more measurements we obtain, the more accuracy, and spatial resolution, we achieve," said Dr. Jack Connerney, co-investigator for the Mars Global Surveyor magnetic filed investigation at NASA’s Goddard Space Flight Center, Greenbelt, Md.

“This map lends support to and expands on the 1999 results,” said Dr. Norman Ness of the Bartol Research Institute at the University of Delaware, Newark. “Where the earlier data showed a “striping” of the magnetic field in one region, the new map finds striping elsewhere. More importantly, the new map shows evidence of features, transform faults, that are a “tell-tale” of plate tectonics on Earth.” Each stripe represents a magnetic field pointed in one direction­positive or negative­and the alternating stripes indicate a "flipping" of the direction of the magnetic field from one stripe to another.

Scientists see similar stripes in the crustal magnetic field on Earth. Stripes form whenever two plates are being pushed apart by molten rock coming up from the mantle, such as along the Mid-Atlantic Ridge. As the plate spreads and cools, it becomes magnetized in the direction of the Earth’s strong global field. Since Earth’s global field changes direction a few times every million years, on average, a flow that cools in one period will be magnetized in a different direction than a later flow. As the new crust is pushed out and away from the ridge, stripes of alternating magnetic fields aligned with the ridge axis develop. Transform faults, identified by “shifts” in the magnetic pattern, occur only in association with spreading centers.

To see this characteristic magnetic imprint on Mars indicates that it, too, had regions where new crust came up from the mantle and spread out across the surface. And when you have new crust coming up, you need old crust plunging back down­the exact mechanism for plate tectonics.

Connerney points out that plate tectonics provides a unifying framework to explain several Martian features. First, there is the magnetic pattern itself. Second, the Tharsis volcanoes lie along a straight line. These formations could have formed from the motion of a crustal plate over a fixed “hotspot” in the mantle below, just as the Hawaiian islands on Earth are thought to have formed. Third, the Valles Marineris, a large canyon six times as long as the Grand Canyon and eight times as deep, looks just like a rift formed on Earth by a plate being pulled apart. Even more, it is oriented just as one would expect from plate motions implied by the magnetic map.

“It’s certainly not an exhaustive geologic analysis,” said Dr. Mario Acuña, principal investigator for the Mars Global Surveyor magnetic filed investigation at Goddard Space Flight Center. “But plate tectonics does give us a consistent explanation of some of the most prominent features on Mars.”

Results were published in the Oct. 10 edition of the Proceedings of the National Academy of Science.

Other scientists working on the project included Dr. G. Kletetschka of the Catholic University of America, Washington, DC, and Goddard Space Flight Center; Dr. D.L. Mitchell and Dr. R.P. Lin of the University of California at Berkeley; and Dr. H. Reme of the Centre d’Etude Spatiale des Rayonnements in France. Dr. Acuña leads the international team that built and operates the Mars Global Surveyor magnetometers. The Jet Propulsion Laboratory, a division of the California Institute of Technology in Pasadena, manages the mission for NASA's Science Mission Directorate in Washington.