The new images of the European Space Agency's Mars Express and NASA's Mars Odyssey are available on the Internet from NASA at http://www.nasa.gov/vision/universe/solarsystem/mgs-images.html and from Malin Space Science Systems, the San Diego company that built and operates the camera, at http://www.msss.com/mars_images/moc/2005/05/19/index.html . 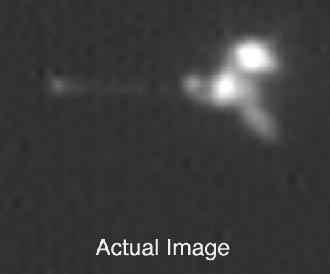 Image right: This view is an enlargement of an image of NASA's Mars Odyssey spacecraft taken by the Mars Orbiter Camera aboard NASA's Mars Global Surveyor while the two spacecraft were about 90 kilometers (56 miles) apart. Image credit: NASA/JPL/MSSS.
+ View more images

Mars Global Surveyor has been orbiting Mars since 1997, Mars Odyssey since 2001. Both are managed for NASA by the Jet Propulsion Laboratory, a division of the California Institute of Technology in Pasadena, Calif. Mars Express has been in orbit since late 2003.

Mars Express was passing about 155 miles away when the Mars Orbiter Camera on Mars Global Surveyor photographed it on April 20. The next day, the camera caught Mars Odyssey passing 56 to 84 miles away.

All three spacecraft are moving at almost 7,000 miles per hour, and at 62 miles distance the field-of-view of the Mars Orbiter Camera is only 830 yards across. If timing had been off by only a few seconds, the images would have been blank.