Take-home message: Looks can be deceiving.

NASA's Mars Exploration Rover Spirit has confronted a martian version of "things being not quite what they seem," though on a much smaller scale. From Spirit's distant landing site out on the plains of Gusev Crater, the highest peak in the "Columbia Hills" appeared to be "Husband Hill."

After making a trek to the "Columbia Hills," Spirit has been traversing and studying slopes, rocks, and sand deposits there for more than a year. New measurements from Spirit show that "McCool Hill" is about 85 feet (26 meters) taller than its neighbor, "Husband Hill." And, indeed, digital maps created from orbital images tell a similar story. At first, "McCool Hill," partly blocked from view, appeared smaller.

Image to the right
In this image of the "Columbia Hills" in Gusev Crater on Mars, "Husband Hill" is 3.1 kilometers distant; "McCool Hill" is 4.2 kilometers away. From this vantage point, "Husband Hill" appears taller than "McCool Hill" because it is closer. Spirit took this mosaic of images with the panoramic camera at the beginning of February, 2004, less than a month after landing on Mars.
Image Credit: NASA/JPL-Caltech/Cornell
+ View larger image

The revised estimates illustrate the importance of location as well as number of measurements. Generally speaking, the more measurements, the better. Even then, there's room for error.

For instance, using the 27 Earth-orbiting satellites in the Global Positioning System (GPS), a team of scientists measured the summit of Mt. Everest at 29,035 feet (8,850 meters) above sea level – plus or minus 7 feet (2 meters), that is.

What's difficult to pinpoint on Earth is even more challenging on Mars - there are only three working orbiters above Mars, and no synchronized GPS.

Though it may not make any difference to the geologic history of Mars, some mission team members have an avid interest in knowing which peak is highest. 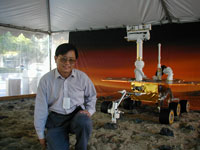 "McCool Hill will be a historical landmark for Spirit," says Dr. Ron Li, a member of the rover science team as well as a Geographic Information Systems expert and professor at Ohio State University. "She will likely spend the upcoming martian winter there exploring the north-facing slope."

Knowing more about the characteristics of each hill also holds a special appeal. To reference the hills in mission planning, team members dubbed each hill in honor of the astronauts from the fallen Columbia space shuttle.

The first people to suspect a discrepancy in the measurements were rover engineer Dr. Chris Leger, who climbs mountains in his spare time, and image processing specialist Bob Deen. In panoramic images taken by Spirit from the summit of "Husband Hill," they noticed that "McCool Hill" appeared higher.

Leger researched elevation angles in images from Spirit's panoramic cameras and estimated the peak of “McCool Hill” to be about six-tenths of a mile (1 kilometer) away and 1.3 degrees higher than the summit of “Husband Hill.” Using trigonometry, he made a quick calculation that showed a difference in elevation of 74.2 feet (22.6 meters).

Trigonometry is the branch of mathematics that covers relationships between the sides and angles of triangles. One of its benefits is that, if you know the distance to the foot of a mountain and you can measure the angle between your location and the summit, you can calculate a mountain's height. 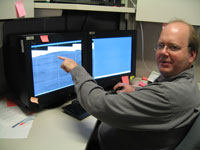 Image to the right
At NASA's Jet Propulsion Laboratory, image processing specialist Bob Deen points to a horizontal line representing the elevation of the rover's cameras projected onto "McCool Hill." Separated from the Spirit rover by a distance of about 1 kilometer (0.62 mile), the peak stood high enough above the line to suggest "McCool" was indeed taller, even given a reasonable margin of error.
Image Credit: NASA/JPL-Caltech/Cornell
+ View larger image

Li and his team then calculated the actual height of "McCool Hill" above the surrounding plains based on satellite data. They used the science of photogrammetry (obtaining reliable measurements through photographs) to estimate the hill's dimensions from stereo (three-dimensional) views taken by the Mars Orbital Camera on the Mars Global Surveyor orbiter.

Mars Global Surveyor data helped scientists use the same technique. By comparing orbital measurements of "Husband Hill" to Spirit's surface measurements, which are more accurate than measurements from farther away, Li's team was able to improve height estimates for "McCool Hill."

Recent measurements from Spirit indicate that "Husband Hill" is 351 feet (107 meters) higher than the point where Spirit landed on the surrounding plains. Li's team further estimated "McCool Hill" to be 436 feet (133 meters)--85 feet higher than its neighbor--above Spirit's landing site.

Image to the left
Rising above the horizon in the distance to the right of the rover is the somewhat taller summit of "McCool Hill." Spirit took this mosaic panorama of images from the summit of "Husband Hill" in November, 2005.
Image Credit: NASA/JPL-Caltech/Cornell
+ View larger image

Like climbing skills, all measurements are subject to improvement. Depending on the quality of the data from Spirit and the Mars Global Surveyor orbiter, the revised height for "McCool Hill" has an estimated margin of error of about a dozen to a hundred feet (a few meters to a few tens of meters).

For a hiker with a heavy load, a potential error of 100 feet might seem significant. For Spirit, it doesn't much matter as long as the rover's solar panels are facing the sun. Still, even though "McCool Hill" and "Husband Hill" may seem minuscule next to Mt. Everest, they are far and away the tallest peaks ever climbed by an explorer on Mars.