Meet the First Woman to Drive on Mars!
First Steps with Toddler Robots

If it weren't for severe motion sickness, Dr. Ashley Stroupe might already have several space shuttle flights under her belt. The child of an aerospace engineer, Stroupe devoured all things space-related during her childhood. Her higher education path literally led to the stars; astronomy was her first choice as an undergraduate, but the solitude of that profession lost out to the lure of robotics, where she would have the opportunity to help build and operate spacecraft that might one day visit the planets she studied through telescopes. 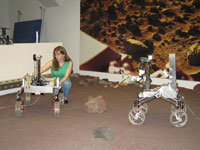 Image right: Dr. Ashley Stroupe makes an adjustment to one of a pair of robots that work together, practicing structure building. In the future, robots like the pictured ones could go to Mars to prepare habitats for future human explorers.
Image credit: NASA/JPL-Caltech
+ View larger image


Right before the Mars Exploration Rovers made history, Stroupe joined JPL, and what a time to join the ranks. Holiday excursions were cut short or non-existent and the lab simmered over from the heat of anticipation. Last-minute meetings to ensure all was well filled restless hours as the world prepared to focus on the dramatic rover landings.

While the rovers were getting their "land legs," Stroupe was getting used to working in an oversized sandbox. Deep in the corners of an aging building that was part of the original bones of JPL, toddler robots train for possible future missions. Intended to precede humans to Mars, these petite teams carry and integrate structural components, simulating remote habitat building.

"We want to send robots ahead of astronauts to build a safe habitat that’s already there when they arrive," said Stroupe. "Especially for Mars, if you have to wait six months for a rescue, you want to make sure it's safe when you go." 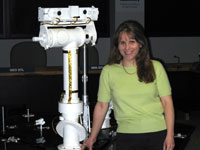 
Giving robots the ability to build habitats and search for resources takes work. Rovers need a very specific set of instructions. "A robot doesn't make assumptions," Stroupe explained. "The real challenge is figuring out how to translate what we want it to do into step-by-step instructions, then run the commands and see what it does. It's what I imagine it would be like to watch a child take its first step or go off to school. You get personal satisfaction from having caused that."

As the promise of the two veteran rover explorers on Mars grew, Earthlings who worked on the project were called to work on different missions. Just a few hundred feet down the road from the sandbox in a nondescript eight-story building, Stroupe switched from prototypes to actual rovers on Mars.

Initially, Stroupe was among a team of experts who interpreted data sent back by the rovers – analyzing the machines' movements and activities. When still more engineers moved on to other projects, the mission team began to recruit new drivers; experience driving on Mars wasn’t necessary – training would be provided. Stroupe was accepted and driving school began.

Getting Your Rover Driver’s License

As with any driver's education class, you don’t just hop into the driver's seat at JPL. Stroupe shadowed a team of eight expert rover drivers. Like responsible parents, skilled drivers hand down knowledge to the newbies, including certain tricks and styles suited to the distinct personalities and unique environments of each rover.

Image left:The top image, taken from Spirit's vantage point atop 'Husband Hill,' is a 360-degree panoramic view. The bottom image highlights the area within the panoramic image where Stroupe made tracks with her command sequences. For high-resolution version of panoramic image, click here:
Image credit: NASA/JPL-Caltech

"It's like trying to drive a car by writing a computer program," Stroupe said. "We have to tell it to turn a certain amount, drive a defined distance, take a picture or use its autonavigation function that allows it to reach goals on its own – all while ensuring its safety."

Training with robotics experts at Carnegie Mellon University, Stroupe was well prepared to take on the hefty job of handling the rovers. Still, realizing the enormity of actually controlling a rover on Mars is nothing less than awe-inspiring to her.

It Takes a Team to Raise a Robot

When someone casually mentioned to her that she was the first woman to drive a rover on Mars, it came as a surprise to Stroupe. After all, nearly half of the rover team is made up of women. Still, the title makes her proud and she hopes it will be inspiring to other people who want to be "firsts" in their fields.

"The most personal satisfaction is getting to work with these rovers and this incredible team. You can't do a project with just one or two people. It's such a rare opportunity for me as an engineer to work with scientists and engineers and feel like I'm making a real, significant contribution to forwarding science and our understanding of our solar system and universe. It's incredibly rewarding," she beamed. "And whether anybody ever knows my name or not, they'll see my [rover] tracks – I guess I have made my mark on Mars!"