Mars Rovers Advance Understanding of the Red Planet
NASA's Mars rovers, Spirit and Opportunity, have been working overtime to help scientists better understand ancient environmental conditions on the red planet. The rovers are also generating excitement about the exploration of Mars outlined in NASA's Vision for Space Exploration. 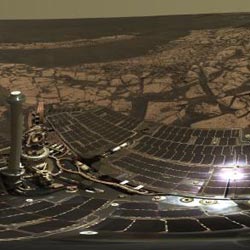 Image right: This is the Opportunity rover's panorama of "Erebus Rim," acquired as the rover was exploring sand dunes and outcrop rocks in Meridiani Planum. Image credit: NASA/JPL/Cornell
+ Full image and caption
+ Browse version of image

The rovers continue to find new variations of bedrock in areas they are exploring on opposite sides of Mars. The geological information they have collected adds evidence about ancient Martian environments that included periods of wet, possibly habitable conditions.

"The extended journeys taken by the two rovers across the surface of Mars has allowed the science community to continue to uncover discoveries that will enable new investigations of the red planet far into the future." said Mary Cleave, associate administrator for the Science Mission Directorate, NASA Headquarters.

NASA's third mission extension for the rovers lasts through September 2006, if they remain usable that long. During their three-month primary missions, the rovers drove farther and examined more rocks than the prescribed criteria for success.

Opportunity begins its third year on Mars today. It is examining bedrock exposures along a route between "Endurance" and "Victoria" craters. Opportunity found evidence of a long-ago habitat of standing water on Mars. 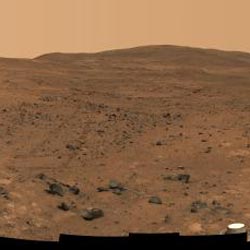 On Jan. 3, Spirit passed its second anniversary inside the Connecticut-sized Gusev Crater. Initially, Spirit did not find evidence of much water, and hills that might reveal more about Gusev's past were still mere bumps on the horizon. By operating eight times as long as planned, Spirit was able to climb up those hills, examine a wide assortment of rocks and find mineral fingerprints of ancient water.

While showing signs of wear, Spirit and Opportunity are still being used to their maximum remaining capabilities. On Spirit, the teeth of the rover's rock abrasion tool are too worn to grind the surface off any more rocks, but its wire-bristle brush can still remove loose coatings. The tool was designed to uncover three rocks, but it exposed interiors of 15 rocks.

On Opportunity, the steering motor for the front right wheel stopped working eight months ago. A motor at the shoulder joint of the rover's robotic arm shows symptoms of a broken wire in the motor winding. Opportunity can still maneuver with its three other steerable wheels. Its shoulder motor still works when given extra current, and the arm is still useable without that motor.

The rovers are two of five active robotic missions at Mars, which include NASA's Mars Odyssey and Mars Global Surveyor and the European Space Agency's Mars Express orbiters. The orbiters and surface missions complement each other in many ways. Observations by the rovers provide ground-level understanding for interpreting global observations by the orbiters. In addition to their own science missions, the orbiters relay data from Mars.

For information about NASA and other agency exploration programs on the Web, visit: http://www.nasa.gov/home

For images and information about the rovers and their discoveries on the Web, visit: http://www.nasa.gov/mars