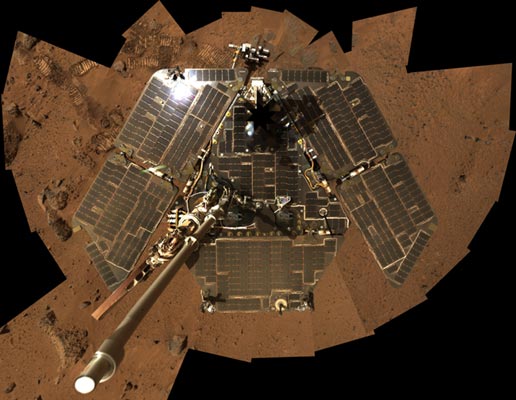 Image above: The most recent self-portrait of NASA's Mars Exploration Rover Spirit shows the solar panels still gleaming in the Martian sunlight and carrying only a thin veneer of dust two years after the rover landed and began exploring the red planet. Spirit's panoramic camera took this mosaic of images on the 586th sol, or Martian day, of exploration (Aug. 27, 2005), as part of a mammoth undertaking that resulted in the largest panorama ever acquired by Spirit ( see http://photojournal.jpl.nasa.gov/catalog/PIA03610). This image is a subset of that panorama, showing just the rover. The vertical projection used here produces the best view of the rover deck itself, though it distorts the ground and antennas somewhat.

This image is an approximate true-color rendering that combines images taken through the camera's 600-nanometer, 530-nanometer and 480-nanometer filters.

Image above: NASA's Mars Exploration Rover Spirit welcomed the beginning of 2006 on Earth by taking this striking panorama of intricately rippled sand deposits in Gusev Crater on Mars. This is an approximate true-color rendering of the "El Dorado" ripple field provided by Spirit over the New Year's holiday weekend. The view spans about 160 degrees in azimuth from left to right and consists of images acquired by Spirit's panoramic camera on Spirit's 708th and 710th Martian days, or sols, (Dec. 30, 2005 and Jan. 1, 2006). Spirit used the Pancam's 750-nanometer, 530-nanometer and 430-nanometer filters to capture the colors on Mars. Scientists have eliminated seams between individual frames in the sky portion of the mosaic to better simulate the vista a person standing on Mars would see. Spirit spent several days acquiring images, spectral data, and compositional and mineralogical information about these large sand deposits before continuing downhill toward "Home Plate."
Image credit: NASA/JPL-Caltech/Cornell
+ Larger view

Still Shining After All This Time (Polar) 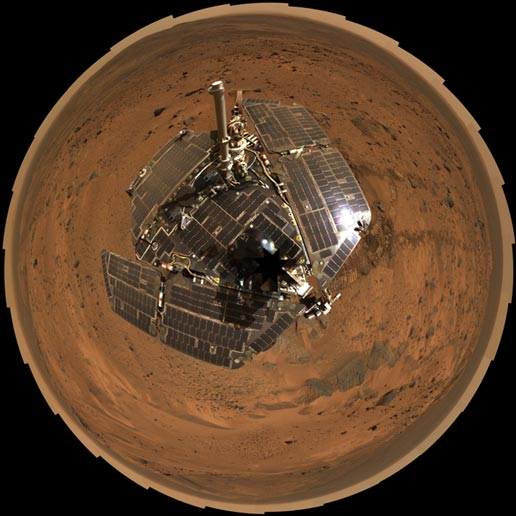 Image above: This bird's-eye view combines a self-portrait of the spacecraft deck and a panoramic mosaic of the Martian surface as viewed by NASA's Mars Exploration Rover Spirit. The rover's solar panels are still gleaming in the sunlight, having acquired only a thin veneer of dust two years after the rover landed and commenced exploring the red planet. Spirit captured this 360-degree panorama on the summit of "Husband Hill" inside Mars' Gusev Crater. During the period from Spirit's Martian days, or sols, 583 to 586 (Aug. 24 to 27, 2005), the rover's panoramic camera acquired the hundreds of individual frames for this largest panorama ever photographed by Spirit. 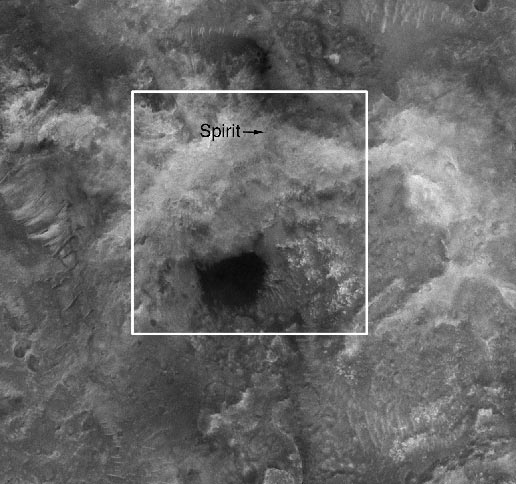 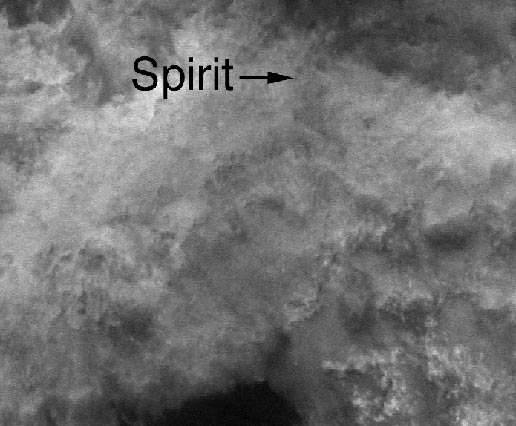 "Husband Hill," the tallest in the range, is just below the center of the image. The image has a resolution of about 50 centimeters (1.6 feet) per pixel. North is up; illumination is from the left. The location is near 14.8 degrees south latitude, 184.6 degrees west longitude. The image was acquired on Nov. 2, 2005. A white box indicates the location of an excerpted portion on which the location of Spirit on that date is marked. Dr. Timothy J. Parker of the Mars Exploration Rover team at the NASA's Jet Propulsion Laboratory, Pasadena, Calif., confirmed the location of the rover in the image. The region toward the bottom of the image shows the area where the rover is currently headed. The large dark patch and other similar dark patches are accumulations of windblown sand and granules.
Image credit: NASA/JPL-Caltech/MSSS
+ Top image: Larger view
+ Bottom image: Larger view
+ Full caption/ high resolution image