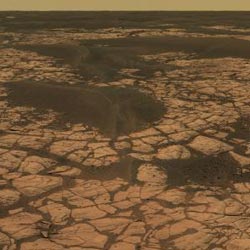 "The rovers went through all of the Martian seasons and are back to late summer," said Dr. John Callas of NASA's Jet Propulsion Laboratory, Pasadena, Calif. He is deputy rover project manager. "We're preparing for the challenge of surviving another Martian winter."

Both rovers keep finding new variations of bedrock in areas they are exploring on opposite sides of Mars. The geological information they collect increases evidence about ancient Martian environments including periods of wet, possibly habitable conditions.

Spirit is descending from the top of "Husband Hill" to examine a platform-like structure seen from the summit. It will then hurry south to another hill in time to position itself for maximum solar-cell output during the winter.

"Our speed of travel is driven as much by survival as by discovery, though the geology of Husband Hill continues to fascinate, surprise, puzzle and delight us," said Dr. Steve Squyres of Cornell University, Ithaca, N.Y., principal investigator for the rover's science instruments. "We've got this dramatic topography covered with sand and loose boulders, then, every so often, a little window into the bedrock underneath."

From the composition and texture of more than six different types of rock inspected, scientists deduced what this part of Mars was like long ago. "It was a hot, violent place with volcanic explosions and impacts," Squyres said. "Water was around, perhaps localized hot springs in some cases and trace amounts of water in other cases. 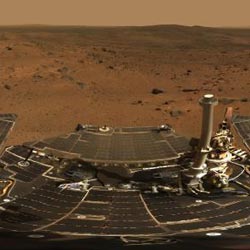 Aided by a good power supply from Spirit's solar cells, researchers have been using the rover at night for astronomical observations. One experiment watched the sky during a meteor shower as Mars passed through the debris trail left by a passage of Halley's comet. "We're taking advantage of a unique opportunity to do some bonus science we never anticipated we would be able to do," said Cornell's Dr. Jim Bell, lead scientist for the rovers' panoramic cameras

Opportunity is examining bedrock exposures along a route between Endurance and Victoria craters. It recently reached what appears to be a younger layer of bedrock than examined inside Endurance. In Endurance, the lowest layers of bedrock were deposited as windblown dunes. Some of the upper layers were deposited as underwater sediments, indicating a change from drier to wetter conditions over time.

The bedrock Opportunity began seeing about two-thirds of the way to Victoria appears to lie higher than the upper layers at Endurance, but its texture is more like the lowest layer, petrified sand dunes. This suggests the change from drier to wetter environmental conditions may have been cyclical.

Rover researchers are presenting their latest data today during the American Geophysical Union meeting in San Francisco. Images and information about the rovers and their discoveries are available on the Web at: http://www.nasa.gov/vision/universe/solarsystem/mer_main.html. For more information about NASA and agency programs on the Web, visit: http://www.nasa.gov/home .