NASA Rover Helps Reveal Possible Secrets of Martian Life
Life may have had a tough time getting started in the ancient environment that left its mark in the Martian rock layers examined by NASA's Opportunity rover. The most thorough analysis yet of the rover's discoveries reveals the challenges life may have faced in the harsh Martian environment. 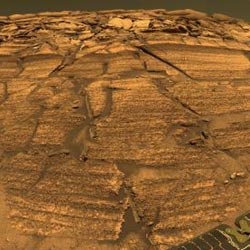 Image right: NASA's Opportunity rover captured this view of "Burns Cliff" after driving right to the base of this southeastern portion of the inner wall of "Endurance Crater." The view combines frames taken by Opportunity's panoramic camera between Nov. 13 and 20, 2004. Image credit: NASA/JPL/Cornell
+ Browse version of image

"This is the most significant set of papers our team has published," said Dr. Steve Squyres of Cornell University, Ithaca, N.Y. He is principal investigator for the science instruments on Opportunity and its twin Mars Exploration Rover, Spirit. The lengthy reports reflect more thorough analysis of Opportunity's findings than earlier papers.

Scientists have been able to deduce that conditions in the Meridiani Planum region of Mars were strongly acidic, oxidizing, and sometimes wet. Those conditions probably posed stiff challenges to the potential origin of Martian life.

Based on Opportunity's data, nine papers by 60 researchers in volume 240, issue 1 of the journal Earth and Planetary Science Letters discuss what this part of the Martian Meridiani Planum region was like eons ago. The papers present comparisons to some harsh habitats on Earth and examine the ramifications for possible life on Mars.

Dr. Andrew Knoll of Harvard University, Cambridge, Mass., a co-author of the paper, said, "Life that had evolved in other places or earlier times on Mars, if any did, might adapt to Meridiani conditions, but the kind of chemical reactions we think were important to giving rise to life on Earth simply could not have happened at Meridiani."

Scientists analyzed data about stacked sedimentary rock layers 23 feet thick, exposed inside "Endurance Crater." They identified three divisions within the stack. The lowest, oldest portion had the signature of dry sand dunes; the middle portion had windblown sheets of sand. Particles in those two layers were produced in part by previous evaporation of liquid water. The upper portion, with some layers deposited by flowing water, corresponded to layers Opportunity found earlier inside a smaller crater near its landing site.

Materials in all three divisions were wet both before and after the layers were deposited by either wind or water. Researchers described chemical evidence that the sand grains deposited in the layers had been altered by water before the layers formed. Scientists analyzed how acidic water moving through the layers after they were in place caused changes such as the formation of hematite-rich spherules within the rocks.

Experimental and theoretical testing reinforces the interpretation of changes caused by acidic water interacting with the rock layers. "We made simulated Mars rocks in our laboratory, then infused acidic fluids through them," said researcher Nicholas Tosca from the State University of New York, Stony Brook. "Our theoretical model shows the minerals predicted to form when those fluids evaporate bear a remarkable similarity to the minerals identified in the Meridiani outcrop."

The stack of layers in Endurance Crater resulted from a changeable environment perhaps 3.5 to 4 billion years ago. The area may have looked like salt flats occasionally holding water, surrounded by dunes. The White Sands region in New Mexico bears a similar physical resemblance. For the chemistry and mineralogy of the environment, an acidic river basin named Rio Tinto, in Spain, provides useful similarities, said Dr. David Fernandez-Remolar of Spain's Centro de Astrobiologia and co-authors.

Many types of microbes live in the Rio Tinto environment, one of the reasons for concluding that ancient Meridiani could have been habitable. However, the organisms at Rio Tinto are descended from populations that live in less acidic and stressful habitats. If Meridiani had any life, it might have had to originate in a different habitat.

"You need to be very careful when you are talking about the prospect for life on Mars," Knoll said. "We've looked at only a very small parcel of Martian real estate. The geological record Opportunity has examined comes from a relatively short period out of Mars' long history."