Rover Missions Renewed as Mars Emerges From Behind Sun
As NASA's Spirit and Opportunity rovers resumed reliable contact with Earth, after a period when Mars passed nearly behind the Sun, the space agency extended funding for an additional six months of rover operations, as long as they keep working. 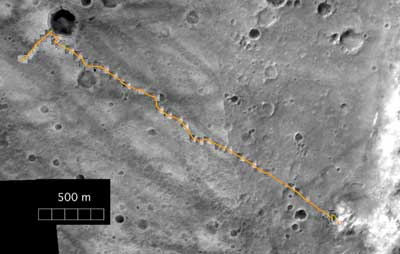 Image above: This map shows the complete journey of Spirit through
the rover's 238th martian day on the surface of Mars.
+ Larger image

Both rovers successfully completed their primary three-month missions on the surface of Mars in April and have already added about five months of bonus exploration during the first extension of their missions.

Neither rover drove during a 12-day period this month, while radio transmissions were unreliable because of the Sun's position between the two planets. Daily planning and commanding of rover activities recommenced Monday for Opportunity and today for Spirit.

"It is a relief to get past this past couple of weeks," said Jim Erickson, project manager for both rovers at NASA's Jet Propulsion Laboratory, Pasadena, Calif. "Not only were communications disrupted, but the rovers were also going through the worst part of Mars southern-hemisphere winter from a solar-energy standpoint."

"Although Spirit and Opportunity are well past warranty, they are showing few signs of wearing out," Erickson said. "We really don't know how long they will keep working, whether days or months. We will do our best to continue getting the maximum possible benefit from these great national resources." 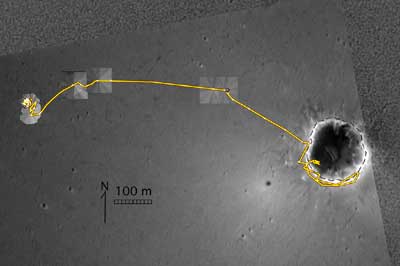 Image above: This map shows the journey of Opportunity through
the rover's 205th martian day on the surface of Mars.
+ Larger image

Rover science team members will spend less time at JPL during the second mission extension. They are able to attend daily planning meetings by teleconferencing from their home institutions in several states and in Europe. "All 150 science team members and collaborators have been provided the tools to be able to participate remotely," said JPL's Dr. John Callas, science manager for the rover project. Workstations researchers used at JPL are at their home institutions. Planning tools include video feeds, workstation display remote viewing, and audio conferencing.

Besides reducing costs, remote operations allow scientists to spend more time at home. "We get back to more normal lives, back to our families, and we still get to explore Mars every day," said Dr. Steve Squyres of Cornell University, Ithaca, N.Y., principal investigator.

Another change in operations is a shift from seven days per week to five days per week from October through December. This accommodates a temporary trim of about 20 percent in the project's engineering team to about 100 members. The rovers' reduced energy supply, during the rest of the martian winter, makes the inactive days valuable for recharging batteries. By January, the energy situation will have improved for the solar-powered rovers, provided they are still operating. The team size will rebound to support daily operations.

As Mars emerges from behind the Sun, Spirit is partway up the west spur of highlands called the "Columbia Hills," a drive of more than 3 kilometers (2 miles) from its landing site. Opportunity is inside stadium-size "Endurance Crater," headed toward the base of a stack of exposed rock layers in "Burns Cliff," and a potential exit route on the crater's south side.

JPL, a division of the California Institute of Technology in Pasadena, manages the Mars Exploration Rover project for NASA's Science Mission Directorate, Washington. Images and additional information about the project are available on the web at http://marsrovers.jpl.nasa.gov/ and http://athena.cornell.edu . For information about NASA programs on the Internet, visit http://www.nasa.gov .