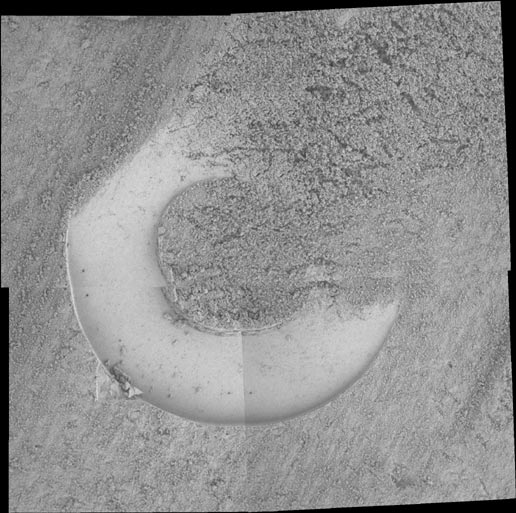 Image above:
NASA's Mars Exploration Rover Spirit used its microscopic imager to take this image mosaic on its 588th martian day, or sol, on Mars (August 29, 2005). It shows the windblown target called "Whymper" on the feature called "Lambert." The view is presented as a perspective projection with geometric seam correction.

A Great Place to Watch the Weather

In this time of year when Mars is most likely to be covered by global dust storms, NASA's Spirit rover has been experiencing relative calm. In fact, the martian winds have been quite beneficial, clearing dust from the rover's solar panels and increasing the solar energy available for driving to new places and conducting scientific experiments.

Another thing the martian wind has done is send hundreds of dust devils spinning across the surface of the planet. From Spirit's high perch approximately 90 meters (295 feet) above the surrounding plains, as shown in this image taken from the summit of "Husband Hill," three dust devils are clearly visible in the plains of Gusev Crater. Planetary Scientist Ron Greeley of Arizona State University, Tempe, describes the whirling vortices of wind and dust as "vacuum cleaners" that were first seen in images from the Viking Orbiter in 1985, though their existence was predicted as early as 1964.

Rind-Like Features at a Meridiani Outcrop 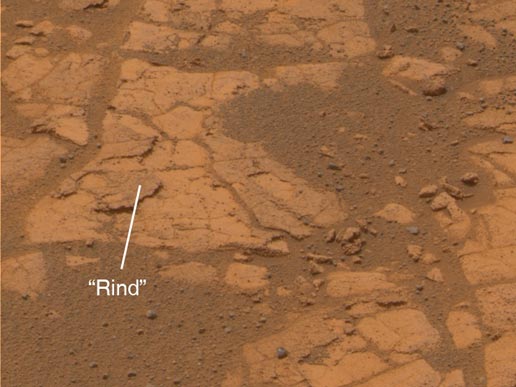 After months spent crossing a sea of rippled sands, Opportunity reached an outcrop in August 2005 and began investigating exposures of sedimentary rocks, intriguing rind-like features that appear to cap the rocks, and cobbles that dot the martian surface locally. Opportunity spent several martian days, or sols, analyzing a feature called "Lemon Rind," a thin surface layer covering portions of outcrop rocks poking through the sand north of "Erebus Crater." In images from the panoramic camera, Lemon Rind appears slightly different in color than surrounding rocks. It also appears to be slightly more resistant to wind erosion than the outcrop's interior. This is an approximately true-color composite produced from frames taken during Opportunity's 552nd martian day, or sol (Aug. 13, 2005).