Image above: This is part of a 360-degree panorama taken by NASA's Mars Exploration Rover Spirit. The image highlights Spirit's arrival at the base of the "Columbia Hills." Since landing at Gusev Crater, Spirit has put more than 3.2 kilometers (2 miles) on its odometer. + Click for full image. Image credit: NASA/JPL.

The Spirit rover is exploring a range of martian hills that took two months to reach. It is finding curiously eroded rocks that may be new pieces to the puzzle of the region's past. Spirit's twin, Opportunity, is also negotiating sloped ground. It is examining exposed rock layers inside a crater informally named "Endurance."

"Both rovers have begun exploring brand new places," said Dr. Mark Adler, mission manager at NASA's Jet Propulsion Laboratory, Pasadena, Calif. "Opportunity has entered Endurance Crater. Spirit has arrived at the Columbia Hills. Both rovers are getting their second wind in bonus time, and we are very excited about the scientific potential we see at their new homes. Of course, the terrain at both locations is challenging, one up and one down. We are making certain that we proceed safely to keep these wonderful machines as healthy as we can for as long as we can."

Spirit began climbing into Columbia Hills late last week, and right away sent pictures of tantalizing rocks. "Some of the rocks appear to be disintegrating. They have an odd kind of rotting appearance, with soft interiors and resistant rinds or hulls," said Dr. Larry Soderblom, a rover science- team member from the U.S. Geological Survey, Flagstaff, Ariz. "The strangest things we've encountered are what we're calling hooded cobras, which are evidently the resistant remnants of some of those rocky rinds. They stand above the surface like small canopies." 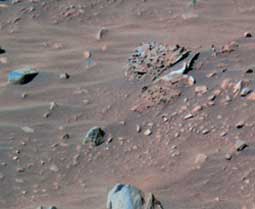 Image left: Spirit's panoramic camera took this false-color image of the rock dubbed "Pot of Gold" (upper left), located near the base of the "Columbia Hills" in Gusev Crater. The rock's nodules and layered appearance have inspired rover team members to investigate the rock's detailed chemistry in coming sols, or days. + Click for full image. Image credit: NASA/JPL/Cornell.

Another rock, dubbed "Pot of Gold," appears to have nodules and resistant planes in a softer matrix. Scientists have chosen it as a target for Spirit to examine with the instruments on the rover's robotic arm. Afterwards, controllers plan to send Spirit to an outcrop farther uphill.

"Although it's too early to even speculate as to the processes these rocks have recorded, we are tremendously excited over the new prospects," Soderblom said.

The Columbia Hills rise approximately 90 meters (about 300 feet) above a plain Spirit crossed to reach them. Scientists anticipate a complex blend of rocks in the hills, perhaps holding evidence about a broader range of environmental conditions than has been seen in the volcanic rubble surfacing the plain. The entire area Spirit is exploring is within Gusev Crater. Orbital images suggest water may have once flowed into this Connecticut-sized basin.

"Halfway around Mars, Opportunity has driven about five meters (16 feet) into stadium-sized Endurance Crater. "As we look back up toward the rim, we can see the progress we've made," said Scott McLennan, science-team member from the State University of New York, Stony Brook.

Image above: This image from Opportunity is a 360-degree panoramic camera mosaic of "Endurance" crater and the surrounding plains of Meridiani. + Click for full image. Image credit: NASA/JPL/Cornell.

Opportunity's first target inside the crater is a flat-lying stone about 36 centimeters by 15 centimeters (14 inches by 6 inches) dubbed "Tennessee" for its shape. Opportunity will inspect it for analysis with the spectrometers and microscopic imager on the rover's robotic arm. It is in a layer geologists believe corresponds to sulfate-rich rocks. The rocks are similar to those, in which Opportunity previously found evidence for a body of water covering the ground long ago.

"The next step will be to move farther down from this layer to our first close-up look at a different sedimentary sequence," McLennan said. "Color differences suggest at least three lower, older layers are exposed below Opportunity's location."

"The interpretation of those lower units is in a state of flux," he said. "At first, we thought we would encounter poorly consolidated, sandy material. But as we get closer, we're seeing more-consolidated, harder rock deeper into the crater. If we can get to the lower units, this will be the first detailed stratigraphic section ever done on another planet. We're doing exactly what a field geologist would be doing."

Spirit is showing what may be the first sign of age and wear. "The right front wheel is drawing about two to three times as much current as the other wheels, and that may be a symptom of degradation," Adler said. "There may be steps we can take to improve it. We'll be studying that possibility during the next few weeks."

JPL, a division of the California Institute of Technology in Pasadena, manages the Mars Exploration Rover project for NASA's Office of Space Science, Washington, D.C. Images and additional information about the project are available from JPL at http://marsrovers.jpl.nasa.gov and from Cornell University, Ithaca, N.Y., at http://athena.cornell.edu.