Rover Team Tests Mars Moves on Earth
Mars rover engineers are using a testing laboratory to simulate specific Mars surface conditions where NASA's rover Opportunity has spun its wheels in a small dune. Careful testing is preceding any commands for Opportunity to resume moving to get out of the dune and continue exploring. 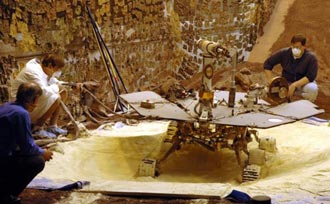 Image right: Rover engineers in JPL's In-Situ Instrument Lab check how a test rover moves in material chosen to simulate some difficult Mars driving conditions. These tests in early May 2005 were designed to help plan the best way for the rover Opportunity to drive off of a soft-sand dune that the rover dug itself into the previous week. The mixture of sandy and powdery material brought in for these specific tests matched the way the soil underneath Opportunity caked onto wheels, filling the spaces between the cleats on the wheels. Image credit: NASA/JPL.
+ Larger image

The rover team at NASA's Jet Propulsion Laboratory, Pasadena, Calif., has cooked up recipes combining various sandy and powdery materials for the best simulation on Earth of the dune where Opportunity dug itself in to wheel-hub depth last week. The team has not asked Opportunity to turn its wheels at all since the rover bogged down during a drive on April 26.

"We choose to proceed cautiously, so we don't expect to begin actually driving out of the dune before next week, possibly later," said Jim Erickson, rover project manager at JPL. "Both Opportunity and Spirit have already provided many more months of scientific exploration than anyone expected. By taking good care of them, we hope to keep them exploring for more months to come. Tests so far have sustained our optimism about Opportunity's ability to drive out of this dune, but we have more testing ahead to understand how robust that capability is."

Opportunity had driven about 40 meters (131 feet) of a planned 90-meter (295-foot) drive on the rover's 446th martian day when its wheels began slipping. The rover was driving backwards at the time. The team frequently alternates between backwards and forwards driving to keep wheel lubrication well distributed. The wheels kept rotating enough times to have covered the rest of the distance if they hadn't been slipping, but the rover eventually barely inched forward. After a turn at the end of the planned drive, Opportunity sensed that it had not turned properly and stopped moving.

Opportunity is positioned across the ridge of an elongated dune or ripple of soft sand that is about one-third meter (one foot) tall and 2.5 meters (8 feet) wide. "We've climbed over dozens of ripples, but this one is different in that it seems to be a little taller and to have a steeper slope, about 15 degrees on part of its face," said Mark Maimone, a JPL rover mobility engineer.

Last week, engineers arranged a simulated dune using sand that was already at JPL's rover testing facility and put a test rover into a comparably dug-in position. The test rover had no difficulty driving away, even when sunk in belly-deep. However, that sand offered better traction than the finer, looser material that appears to make up the surface at Opportunity's current position. "We needed to do tests using material more like what Opportunity is in, something that has a fluffier texture and cakes onto the wheels," said JPL rover engineer Rick Welch, who is leading the tests.

Experimenting with different mixtures, engineers and scientists came up with a recipe that includes play sand for children's sandboxes, diatomaceous earth for swimming pool filters and mortar clay powder. Then they went to several home supply and hardware stores to find enough bags and boxes of the ingredients to make more than 2 tons of the simulated Mars sand for more realistic mobility tests, said JPL rover mobility engineer Jeff Biesiadecki.

Dr. Robert Sullivan of Cornell University, Ithaca, N.Y., a rover science team member, worked with engineers in the JPL testbed to match the properties of the test sand as closely as possible with those of the sand beneath Opportunity, based on images of wheels and wheel tracks on Mars. "We found that when the wheels dig in, the material we're using does stick to the wheels and fills the gaps between the cleats, but it doesn't stick when you're just driving over it. That's good because it's the same as what we see in the images from Opportunity," Sullivan said.

Experiments indicate that in this more powdery material, the test rover positioned comparably to Opportunity can drive out after some initial wheel-spinning. More testing, analysis, planning and review will precede any actual commands for Opportunity to begin driving away from the dune.

Meanwhile, Opportunity has been using its cameras to study its surroundings at the edge of a region called "Etched Terrain." Since landing more than 15 months ago, it has driven 5.35 kilometers (3.32 miles). Spirit, halfway around Mars, has recently been using all of its research tools to examine an outcrop called "Methuselah," the first outcrop of layered rock that Spirit has found. The rover has also been taking short movies of dust-carrying whirlwinds called "dust devils." On some afternoons, the rover sees several at once moving across the plain. Spirit has driven a total of 4.31 kilometers (2.68 miles).

JPL, a division of the California Institute of Technology in Pasadena, has managed NASA's Mars Exploration Rover project since it began in 2000. Images and additional information about the rovers and their discoveries are available on the Internet at http://www.nasa.gov/vision/universe/solarsystem/mer_main.html and http://marsrovers.jpl.nasa.gov.