Spirit's "Lookout" panorama is available online at http://www.nasa.gov/vision/universe/solarsystem/mer_main.html and http://marsrovers.jpl.nasa.gov. 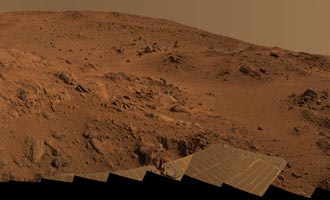 Image right: This view from Spirit is from a position known informally as "Larry's Lookout" along the drive up "Husband Hill." The summit of Husband Hill is the far peak near the center of this panorama and is about 200 meters (656 feet) away from the rover and about 45 meters (148 feet) higher in elevation. The bright rocky outcrop near the center of the panorama is part of the "Cumberland Ridge," and beyond that and to the left is the "Tennessee Valley." Image credit: NASA/JPL/Cornell
+ Larger image
+ QTVR of panorama (1 MB)
+ Panorama with narration

Dr. Jim Bell of Cornell University, Ithaca, N.Y., lead scientist for the panoramic cameras on both the Spirit and Opportunity Mars rovers, said, "Spirit and the rover team worked hard over many weeks to get to this vantage point along the flanks of Husband Hill. The rugged ridge and valley terrain seen here is similar in some respects to the view seen months earlier at the 'West Spur,' but the chemistry and mineralogy here are significantly different. Specifically, some of the areas seen here amid the outcrop rocks and in places where the subsurface was exposed by the rover wheels contain the highest sulfur abundances ever measured by Spirit."

The view includes the summit of Husband Hill about 200 meters (about 660 feet) southward and about 45 meters (about 150 feet) higher. As Spirit continues uphill, scientists are looking for evidence about whether the intensity of water-related alteration increases with elevation or whether there are pockets of more heavily altered rocks and soils scattered throughout the hills.

Spirit's panoramic camera took more than 300 individual frames between Feb. 27 and March 2 that are combined into the big picture. Downloading the frames to Earth took several weeks, and processing took additional time. Imaging specialists at Cornell and at NASA's Jet Propulsion Laboratory, Pasadena, Calif., calibrated the color and assembled the image.

Spirit and its twin, Opportunity, successfully completed three-month primary missions a year ago. In extended missions since then, they have been exploring at increasing distances from their landing sites.