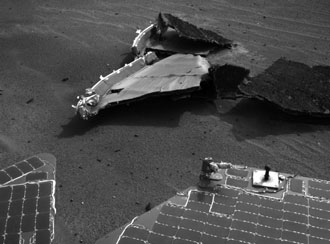 Image right: This image from Opportunity shows a portion of the heat shield that the spacecraft jettisoned shortly before landing. This flank piece broke off from the main piece of the heat shield upon impact. Image credit: NASA/JPL. + Click for larger image.

The rovers successfully completed their three-month primary missions in April. They astound even their designers with how well they continue operating. The unanticipated longevity is allowing both rovers to reach additional destinations and to keep making discoveries. Spirit landed on Jan. 3 and Opportunity Jan. 24, 2004, respectively.

"You could have cut the tension here with a knife the night Spirit landed," said NASA Administrator Sean O'Keefe. "Just remembering the uncertainty involved with the landing emphasizes how exciting it is for all of us, since the rovers are still actively exploring. The rovers created an amazing amount of public interest and have certainly helped advance the Vision for Space Exploration," he said. The twin Mars explorers have drawn the most hits to NASA Web sites - - more than 9 billion in 2004.

Dr. Charles Elachi, director of NASA's Jet Propulsion Laboratory, Pasadena, Calif., said, "Little did we know a year ago that we'd be celebrating a year of roving on Mars. The success of both rovers is tribute to hundreds of talented men and women who have put their knowledge and labor into this team effort."

"The rovers are both in amazingly good shape for their age," said JPL's Jim Erickson, rover project manager. "The twins sailed through the worst of the martian winter with flying colors, and spring is coming. Both rovers are in strong positions to continue exploring, but we can't give you any guarantees."

Opportunity is driving toward the heat shield that protected it during descent through the martian atmosphere. Rover team members hope to determine how deeply the atmospheric friction charred the protective layer. "With luck, our observations may help to improve our ability to deliver future vehicles to the surface of other planets," Erickson said. 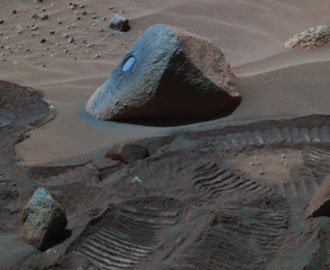 Image left: Spirit's miniature thermal emission spectrometer examined this rock, dubbed "Wishstone," and data indicated that the mineralogy of the rocks in this area is different from that of rocks encountered earlier in the plains of Gusev Crater or in the bedrock outcrops examined so far in the "Columbia Hills" inside the crater. Image credit: NASA/JPL/Cornell. + Click for larger image.

Spirit is exploring the Columbia Hills within the Gusev Crater. "In December, we discovered a completely new type of rock in Columbia Hills, unlike anything seen before on Mars," said Dr. Steve Squyres of Cornell University, Ithaca, N.Y., principal investigator for the rovers' science payloads.

Jumbled textures of specimens dubbed "Wishstone" and "Wishing Well" look like the product of an explosion, perhaps from a volcano or a meteor impact. These rocks are much richer in phosphorus than any other known Mars rocks. "Some ways of making phosphates involve water; others do not," Squyres said. "We want to look at more of these rocks to see if we can distinguish between those possible histories."

NASA's next Mars mission, the Mars Reconnaissance Orbiter, is due to launch in August. "As great as the past year has been, Mars launch opportunities come along like clockwork every 26 months," said Dr. Firouz Naderi of JPL, manager of NASA's Mars Exploration Program. "At every one of them in the foreseeable future, we intend to go to Mars, building upon the findings by the rovers."

NASA Chief Scientist Dr. Jim Garvin said, "Mars lures us to explore its mysteries. It is the most Earth-like of our sister planets, and many believe it may hold clues to whether life ever existed or even originated beyond Earth. The rovers have shown us Mars had persistently wet, possibly life-sustaining environments. Beyond their own profound discoveries, the rovers have advanced our step-by- step program for examining Mars. We will continue to explore Mars robotically, and eventually with human explorers."

Images and additional information about the rovers and their discoveries are available on the Internet at http://www.nasa.gov/vision/universe/solarsystem/mer_main.html and http://marsrovers.jpl.nasa.gov/home/index.html.

JPL has managed the Mars Exploration Rover project since it began in 2000. JPL is a division of the California Institute of Technology in Pasadena.