Electric Dust Storms on Mars
Dust storms frequently rise from the cold deserts of Mars, sometimes even raging across the entire planet. The storms might also crackle with electricity, which may produce reactive chemicals that build up in the Martian soil, according to a NASA-funded research team. The chemicals, like hydrogen peroxide (H2O2), may have caused the contradictory results when NASA's Viking landers tested the Martian soil for signs of life, according to the researchers. 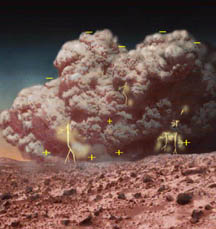 Image right: This is an artist's concept of an electrically-charged dust storm on Mars. The "+" and "-" symbols represent positive and negative electric charges, respectively. Print-resolution image Credit: NASA

In 1976, the twin Viking landers scooped up Martian soil and added nutrients mixed with water to it. If microscopic life were present, the nutrients would be used up and waste products would be released. Three different experiments involved in this test gave conflicting results. The Labeled Release and the Gas Exchange experiments indicated something active was in the soil, because the nutrients were broken down. However, the Mass Spectrometer experiment did not find any organic matter in the soil.

In 1977, Viking researchers suggested that the contradiction could be explained if a very reactive nonorganic substance that imitated the activity of life by breaking down the nutrients was embedded in the soil. Hydrogen peroxide and ozone (O3) were considered possible reactive compounds.

While ultraviolet radiation from the sun could produce a certain amount of reactive chemicals in the atmosphere, nobody knew how large amounts of such reactive material could accumulate in the Martian soil. Some researchers at the time thought that dust storms might be electrically active like thunderstorms on Earth, and that these storms might be a source of the new reactive chemistry.

This dust storm suggestion remained dormant for close to 30 years. Now, detailed analysis by the team supports this theory, based on their results from field and laboratory studies over the past five years. Lead authors Dr. Gregory Delory, senior fellow at the University of California Berkeley Space Sciences Laboratory, and Dr. Sushil Atreya, planetary science professor at the University of Michigan in Ann Arbor, reported their results in a tandem set of papers in the June 2006 issue of the journal "Astrobiology".

Dust particles could become electrified in Martian dust storms when they rub against each other as they are carried by the winds, transferring positive and negative electric charge in the same way you build up static electricity if you shuffle across a carpet. "From our field work, we know that strong electric fields are generated by dust storms on Earth. Also, laboratory experiments and theoretical studies indicate that conditions in the Martian atmosphere should produce strong electric fields during dust storms there as well," said co-author Dr. William Farrell of NASA's Goddard Space Flight Center, Greenbelt, Md.

The researchers calculated that electric fields generated by the swirling dust are strong enough to break apart carbon dioxide and water molecules in the Martian atmosphere. They then identified the various ways the broken molecules recombine into reactive chemicals like hydrogen peroxide and ozone, and calculated the amounts that might accumulate in the Martian soil over time. "We estimate dust electrification could produce so much hydrogen peroxide that it would snow out of the atmosphere and permeate the Martian soil," said Atreya.

The theory could be tested further by an electric field sensor working in tandem with an atmospheric chemistry system on a future Mars rover or lander, according to the team.