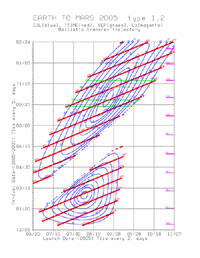 Mission planners and navigators start with prophetic "porkchop plots," interplanetary "fuel efficiency" maps named for their shape and appearance. The plots show how much energy it will take to escape Earth's gravity, place the spacecraft on a course to Mars, and capture it into orbit upon arrival. The required amount of energy varies depending on where Earth and Mars are in their orbits around the Sun when the spacecraft launches and later arrives at the red planet.


Swirling like a thumbprint, one set of contour lines in the porkchop plot shows the energy required for liftoff at different dates; another for gravity capture. The smaller the ellipse, the less energy is needed. Mission planners are most interested in where the smallest ellipses intersect, particularly for 2005, a more difficult year than the rovers faced in 2003, when Earth and Mars were closer than they’d been in 60,000 years.

"The less energy needed for launch and arrival, the cheaper it is to go to Mars because the spacecraft needs less fuel," explains spacecraft navigator Moriba Jah. "That cost savings is something we all welcome, especially since our orbiter has to travel farther than some missions." 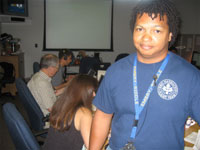 Based on their analysis, mission planners chose a "fuel-efficient" three-week launch window beginning August 10, 2005. Early in the window on the 12th, the orbiter’s Atlas V rocket provided a flawless takeoff into the bright Florida morning. Even with "fuel savings" planned through the prior porkchop-plot analysis, the rocket still needed 672,000 pounds (305,000 kilograms) of fuel, nearly 92% its total launch mass!

Burning Fuel for a Perfect Path to Mars
"A launch vehicle supplies almost all of the energy to get to Mars, and we were grateful the Atlas V set us on a very accurate path," said Allen Halsell, a navigator and designer of the first planned course correction. "It certainly made my job easier fifteen days later when we had to perform our very first maneuver." 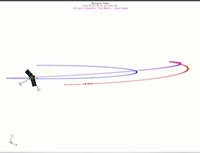 Five planned course corrections, called "trajectory correction maneuvers" (TCMs), keep the orbiter on track during its long cruise through interplanetary space. The first and largest maneuver consisted of a brief 44.5-second firing of the engines on August 27, 2005. Not even a full minute, and the nudge was enough to convey the craft to a precise, Mars-bound path. Unlike later maneuvers, the first correction moves the spacecraft tens of thousands of kilometers into position.

"The farther you're away from Mars, the less propellant you need to move great distances," Jah explained. "For example, if two people start walking and their directions differ by only a degree, after five seconds they aren’t far apart, but after days of walking they’ll be really far away. Little adjustments at the beginning have a huge impact at the end."

Without an early and accurate launch, the first trajectory correction maneuver would have needed about ten times the intensity. A less intense burn translates into more fuel savings, but whatever the fuel expended, there’s an even greater reason for performing the first maneuver. 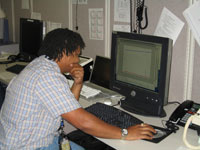 "If you don't do a trajectory correction maneuver early on, you’re not going to Mars, you're just circling the Sun," said Jah.
Halsell felt the stress and drama of the moment when the first trajectory maneuver burn took place.

"Firing the engines for the first time was like riding a roller coaster – a little bit exciting and a little bit scary," Halsell described. "Looking at the radio signal, we could tell things had gone well. It was a big relief!"

The wildest ride for navigators will come during Mars Orbit Insertion (MOI) in March, 2006 when their "fuel efficient" porkchop-plot selections will really pay off. As Mars Reconnaissance Orbiter approaches Mars traveling about 6,500 miles per hour, it will need to fire six main engines for a long 25-minute burn, slowing the spacecraft down by about 2,240 miles per hour! That reduction of speed relative to the planet will place the spacecraft into a long looping orbit around Mars.

"You can bet we’re rehearsing for that during cruise," Jah said. "For most of that intensive burn, we'll have a signal until the spacecraft goes behind Mars. Then it's a really intense time, waiting anxiously for the orbiter to appear safely again half an hour later--we're going to have to conserve our own energy for that!"