Bump Into Mars Tonight
The Moon and Mars will be above your neighborhood on Opportunity's "One Martian Year" Anniversary, December 12, 2005. 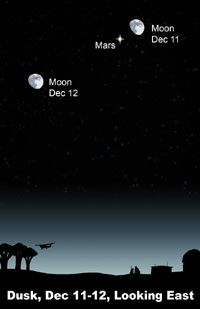 "Mars and the Moon are people-friendly because you can see them both without any optical aid," says Jane Houston Jones, an amateur astronomer and outreach specialist at JPL. Jones works on Saturn-related topics for her official day job, but at night, she encourages people to look up and marvel at the whole universe.

Look Up and Say "Awe"

Jones vividly remembers the excitement and shock of seeing her first meteor shower while on vacation in New Mexico when she was 10 years old. "I was fascinated with the sky," Jones smiles.

Despite her awe, Jones came home from vacation and went back to reading and writing and hiking and "doing kid-things" in the hustle and bustle of American life. She later became a mild-mannered vice-president of a bank, working 12 hours a day, but kept looking up at the sky after work.

"In my thirties, I finally realized there was more to life than a 9-to-5 job," explains Jones. She decided to take a telescope-making class as an inexpensive way to get closer to the planetary neighbors she enjoyed seeing after the daily grind.

"My first telescope was made out of a huge cardboard tube, and included a cereal box, a drainpipe, cedar roofing shingles, an old record, a sheet of plywood, a mirror I ground myself, an eye piece, and some nails and screws." 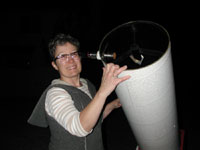 The telescope grew to be six feet tall when all was said and done. The behemoth wouldn't fit in her car, and she had to borrow her parent's station wagon to haul it around. Mom and dad now have a telescope of their own.

Looking through telescopes from her own backyard, Jones still loves spotting cracks, faults, and volcanic domes on the Moon; rings of ice around Saturn; and enormous volcanoes and canyons on Mars. Even without a telescope, reverie comes in looking out into our solar system and watching how the stars, Moon, and planets move night after night with respect to the rotation of the Earth.

Understanding Movement in the Heavens

"What's exciting right now is that you don't need a telescope to observe the movements of the Moon and Mars," says Jones. "If you look up first on December 11, and then the next night at the same time, the Moon's position against the starry background will have changed much more than Mars' position."

That happens because the Moon is orbiting the Earth, only a quarter of a million miles away. Mars, however, is orbiting the Sun, and is now over 70 million miles away from Earth, so changes in Mars' direction in the night sky are not as easily detected from Earth. (Note that both the Moon and Mars also change their directions above the horizon during the night, but this motion is due to the Earth's rotation on its axis.) 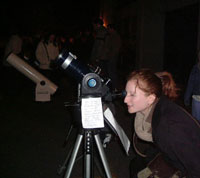 Image to left:
On November 12, 2005, a member of the Saturn Observation Campaign held an event in Ireland where 200 people viewed the Moon and Mars through telescopes. Image credit: D. Kelleghan
+ Click for larger image

Even though Mars is farther away, the red planet is still close to Earth relatively speaking. Mars goes once around the Sun about every two Earth years, bringing a brighter view of Mars to Earthlings every 26 months. "I like to bring my telescopes out on neighborhood sidewalks when Mars is closer to Earth, so people can really bump into Mars," smiles Jones. "And that time is now!"

As a family hobby, Jones and her husband have shared their views of the universe with over 9,000 people in 2005. "My husband and I actually met on a mountaintop at a public astronomy event. We set up our telescopes near each other, and as my husband says, 'We collided like ions!'

Jones encourages people of all ages to step outside to fall in love with our neighboring planets and stars. She created Mars Viewing Tips for any curious beginners.

"Astronomy is for everyone. You can be a total solitary curmudgeon and have that beautiful vista of the sky to enjoy alone, or you can join astronomy clubs where extroverts like myself would love to teach you how to set up a telescope and give you a closer look at planets like Mars and other wonders of the night sky" says Jones.

So, if you look overhead at night on December 12 and gaze at Mars next to the Moon, be sure to wish Opportunity a "Happy Anniversary." Mars will be visible until June, but will appear smaller and smaller as Earth passes its red neighbor in their orbits around the Sun. Even closer views of Mars are on the Internet indefinitely, thanks to the rovers and NASA's other Mars missions!