Debate Heats Up Over Natural Gas on Mars
Would Methane on Mars Mean Life?

Methane is heating up more than gas stoves these days – it's fueling a controversy over whether life may exist on Mars. On Earth, methane is a greenhouse gas produced by bacteria living in cow guts, landfills, oil wells, hot springs, and marshlands. Known as methanogens, the bacteria thrive in environments devoid of oxygen such as swamp muds, where they strip electrons from hydrogen, transfer them to carbon dioxide, use the heat emitted as energy for growth, and generate methane as a waste product.

But bacteria aren't the only means of producing methane. Volcanoes and hot springs can emit methane into the atmosphere. Comets carrying frozen methane can splatter it over a broad area if they strike a planet.

Reports of Methane Are Intriguing

Reports of methane on Mars during the past several months have prompted speculation as to how it might have gotten there, assuming the data are reliable. Three different groups using instruments with slightly different sensitivities have detected trace amounts of the gas – one using a spectrometer orbiting Mars and two using Earth-based telescopes equipped with spectrometers. (A spectrometer is an instrument that separates light at different wavelengths into distinct signals, producing a spectrum.) Because methane is colorless, it can't be seen by the naked eye. But like all molecules, methane absorbs specific wavelengths of sunlight as they are reflected off the planet's surface to produce a "signature" that can be measured with a spectrometer. "The whole idea is to look at Mars with new eyes outside of just the photography," says atmospheric scientist Mark Allen, a principal research scientist at the Jet Propulsion Laboratory and visiting faculty member at Caltech who would like to send a spacecraft to Mars to settle the question once and for all. "You can see new things, like gases that are invisible to the naked eye, when you look at them spectroscopically. You can see plumes generated from below the surface that would not be visible otherwise."

On Mars, the normally odorless gas wouldn't be exactly the same as the stuff that boils water on Earth, because here it is spiked with a sulfur-bearing compound to give it a powerful stink. That's so people will notice any potentially dangerous leaks. But otherwise it's the same gas, consisting of one atom of carbon and four atoms of hydrogen. With a sensitive enough spectrometer, it could be detected from space just as in a chemistry lab.

If confirmed and traced to a source, the presence of methane on Mars would be considered so significant that it would likely provide an "X" for a future landing site. NASA's chief scientist, Jim Garvin, said last June at a meeting of the Mars Exploration Program Analysis Group: "Even if you can't tell the source, it's probably volcanism or life. And if there's volcanism, that increases the possibility of life. It's important to localize the source, not just detect it."

Three Reports of Methane on Mars Image to right: Olympus Mons
Scientists analyzing data from the Mars Express spacecraft, a mission of the European Space Agency, reported detection of methane in 2004. Volcanoes, such as Olympus Mons, the tallest volcano in the solar system, are a potential source of methane. This oblique view of the caldera on top of Olympus Mons was taken by the high-resolution camera on the Mars Express spacecraft. Scientists are not certain when volcanism last occurred on Mars. Image credit: ESA + Larger Image

Garvin was responding to verbal reports by European Space Agency scientists, led by Italian investigator Vittorio Formisano, that they had detected methane using the Planetary Fourier Spectrometer aboard the Mars Express spacecraft. Within weeks, a team led by Vladimir Krasnopolsky at Catholic University of America produced the first published report, confirming his team's earlier measurements of 10 ppb (parts per billion) of methane on Mars using the Fourier Transform Spectrometer on the Canada-France-Hawaii telescope on Mauna Kea, Hawaii. Next, a team led by Michael Mumma, at NASA's Goddard Space Flight Center, confirmed their earlier detection of latitudinally varying methane on Mars using NASA's Infrared Telescope Facility (IRTF) on Mauna Kea and the Gemini South telescope in Chile. What's more, Mumma's team reported enhanced water vapor in the same regions as the methane.

Krasnopolsky and Mumma discussed their findings in November at a meeting of the American Astronomical Society's Division of Planetary Sciences. They agreed that methane would only last 300 years in the martian atmosphere before being destroyed by sunlight. But they disagreed on what could be producing it. Krasnopolsky described methanogenic bacteria as "a plausible source of methane on Mars." Mumma was more circumspect, saying, "It certainly does help the idea that methanogens are responsible, but it is not definitive in any way."

Krasnopolsky ruled out volcanism for two reasons. One was that the youngest known volcanoes on Mars are 12 million years old, too long ago for resulting methane to remain in the atmosphere. (More recent data from Mars Express suggest volcanic activity as recently as 4 million years ago, still too far back in time for methane to remain in the atmosphere.) The other was that his team measured even lower amounts of sulfur dioxide than methane on Mars, the opposite of volcanic processes on Earth, which produce far more sulfur dioxide than methane. Based on physical laws and experience, geologists generally expect processes such as volcanism to be more or less the same on any planet.

Image to right: Hot Lava on Hawaii
Hot fluids circulating through magnesium-rich basalt can produce methane. Hawaiian volcanoes produce basaltic lavas, like that shown here on the flanks of Mount Kilauea. Molten basalt flows relatively smoothly over the surface of the Earth because it is high in iron and magnesium and low in silica (quartz consists of crystalline silica). The reason why Mount St. Helens erupted explosively in 1980 was that the magma in the volcano contained large amounts of silica. Basalt makes up much of the martian crust. Image credit: NASA/JPL. + Larger Image

Mumma suggested that geothermal processes such as serpentinization – the alteration of magnesium-rich basalt rocks by hot fluid circulating through them – could also produce methane. Basalt is the most common kind of solidified lava, usually black to dark gray in color. Two of the regions identified by his team as having enhanced methane levels are also known to have steep scarps, where methane migrating from Mars' interior to the surface could potentially seep out between rock layers. 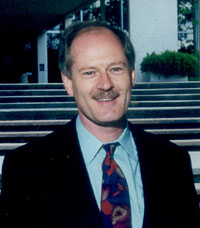 Image to left: Chris Webster
Chris Webster is working on a spectrometer that will detect minute amounts of methane on the Mars Science Laboratory, to be launched to the red planet in 2009. Image credit: NASA/JPL.
+ Larger Image

Meanwhile, Mark Allen and other NASA scientists are working on ways to get better measurements of methane on Mars. The Mars Science Laboratory, the next rover to be launched to Mars in 2009, will carry an instrument called the Tunable Laser Spectrometer as part of an analytical chemistry suite being provided by NASA's Goddard Space Flight Center. The spectrometer will detect amounts of methane as low as 20 parts per trillion wherever the rover travels, according to Jet Propulsion Laboratory principal investigator Chris Webster. It will measure ratios of carbon isotopes -- carbon atoms that have different masses because of the number of neutrons they carry. Carbon atoms can serve as biosignatures when organisms selectively metabolize lighter isotopes because it takes less energy to move lighter atoms around. The laser spectrometer will also measure water vapor, oxygen isotopes, hydrogen peroxide, formaldehyde, and other compounds.

At NASA's Jet Propulsion Laboratory in Pasadena, Allen is working on a new proposal for a spacecraft that would make highly sensitive global measurements of methane from orbit, along with dozens of other trace gases. The spacecraft would pinpoint the source of such gases.

"Chemistry can be a tool for astrobiological exploration," said Allen. "It's like the unseen universe. You see it one way. Infrared, microwave, and ultraviolet instruments all see it another way. You might not be able to see a hot spot deep below the surface or magma getting ready to erupt. But there might be gases leaking out, like the sulfur gases that you could smell coming from magma miles below the surface on Hawaii before the recent eruptions began in the Kilauea volcano. You can still smell the gases while the volcano continues to erupt."

Image to right: Reykjanes Peninsula Boiling Mud
Hot springs can emit methane along with other gases into the atmosphere. NASA Chief Scientist Jim Garvin takes viewers on a video tour of volcanic features on Iceland that may be similar to those on Mars. Image credit: NASA/JPL. + Larger Image

Instruments on the spacecraft would also measure trace amounts of water vapor, oxygen, ozone, nitrous oxide, hydrogen sulfide, ammonia, and a host of other airborne compounds. Like methane, such compounds could be, but wouldn't necessarily be, indicative of life. Their locations would become waystations on a map that would guide future rovers to sites where life might conceivably exist.

No doubt scientists will continue to debate the topic and search for new and better ways to duplicate and improve measurements of methane on Mars. It may be a few years before they, and all the rest of us, will know for certain if the same gas that heats homes on Earth also heats the atmosphere (though only by an extraordinarily minuscule amount) on comparatively frigid Mars.

More at Mars Exploration Program .
› Back To Top