Beam Me to Mars
"Are we there yet?" Everyone has faced this exasperating question from impatient companions on a long road trip. Imagine if the trip lasted six months. One way.

It takes conventional rockets about six months just to get to Mars. Total roundtrip times can be as long as three years, because an extended stay on the Red Planet is required while the Earth and Mars progress in their orbits enough to be closely aligned again for the return trip.

But an exciting NASA-funded research project could send astronauts racing to Mars up to six times faster. The solution -- proposed by Dr. Robert Winglee of the University of Washington -- sounds like science fiction. A spacecraft rides a beam of plasma, which is electrified and magnetized gas, all the way to Mars and back. The roundtrip journey could be wrapped up in about 90 days using Winglee's Magnetized Beam Plasma Propulsion system, dubbed Magbeam.

How It Works and Where It Came From 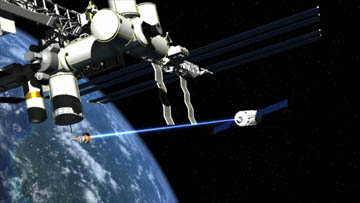 Image above: Artist's concept of a space station in low Earth orbit fitted with the Magbeam system. The Magbeam unit extends from the bottom module of the station, and the blue line represents the plasma beam. The plasma beam links magnetically to the target spacecraft on the bottom right, launching it on its journey. Image credit: U. of Washington/Robert Winglee. Click here for a 3.6 meg print-resolution image (tif format)

Next Stop, The Red Planet

A typical Mars mission would begin as Earth and Mars are approaching the point of closest alignment as they progress in their orbits, with the Earth slightly behind Mars. A conventional rocket first launches the target spacecraft into orbit around Earth. The Magbeam station would fire a plasma beam at the target spacecraft for about four hours, giving it a boost toward Mars. The spacecraft coasts to Mars in about 50 days, after which another station in orbit around Mars fires a plasma beam at the spacecraft to slow it down.

If the challenges can be overcome, the Magbeam system will offer several benefits: First, a fast trip to Mars will reduce the space radiation hazard to astronauts. High-speed particles from the Sun and interstellar space continually bombard any spacecraft traveling between planets. However, this space radiation can be deflected by planetary magnetic fields or absorbed by a planet's atmosphere. Getting astronauts quickly from one planet to another will reduce their exposure to space radiation. The high-speed makes Magbeam useful for missions beyond Mars as well, "We think this would be a good system for delivering payloads to Jupiter and beyond," said Winglee. 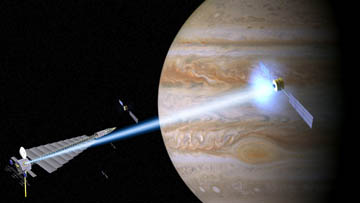 Image above: Artist's concept of a Magbeam station at Jupiter. The plasma beam, represented by the blue line, links to the magnetic field generated by the target spacecraft (top right). Image credit: U. of Washington/Robert Winglee. Click here for a 365 k print-resolution image (jpg format)

Research into this radical design is being funded by the NASA Institute for Advanced Concepts (NIAC). NIAC was created in 1998 to solicit revolutionary concepts that could greatly advance NASA's missions from people and organizations outside NASA. The proposals push the limits of known science and technology, and thus are not expected to be realized for at least decade or more. NIAC's intention is to discover ideas which may result in beneficial changes to NASA's long-range plans. The Universities Space Research Association operates NIAC for NASA.