Killer Electrons
"Killer electrons"?! Should you be hiding under a table?

Probably not. Killer electrons are what scientists call the electrons trapped in Earth's outer radiation belt that can damage or "kill" satellites. Many satellites that have flown through the Van Allen radiation belts have confirmed their existence and measured them. Killer electrons have been blamed for many spacecraft failures. Not surprisingly, understanding them has become one of NASA's top priorities.

Right: The belts of trapped radiation above the Earth's atmosphere, but within the magnetosphere, were first detected by James Van Allen in 1958. They were mapped by Explorer I, America's very first spacecraft. Credit: UCAR/Windows to the Universe.

Because they zip around at nearly light speed, these particles pack a lot of punch. Each killer electron particle may have close to a thousand times more energy than you receive in a dental X-ray! So you can see how a large increase in the number of them could result in serious harm to spacecraft. Killer electrons easily penetrate thick shielding and bury themselves in the insulation around sensitive satellite electronics. Electricity from these accumulating electrons builds up in the spacecraft, and a strong internal electrical discharge can occur - a miniature lightning strike.

Now why should you care? Since they damage satellites, killer electrons can cause problems with your telephone, cell phone, or television picture. Pager service and GPS interruptions also affect millions of people. The degree of the effects depends on the strength of the killer electron event, of course. As technology systems depend more on satellites, you can expect these little powerhouses to become even more important to you.

How did they get there?

Electrically charged particles - both electrons and ions (an atom that has lost or gained an electron) - have accumulated in our planet's magnetic field, the magnetosphere. These particles of varying energies make up the radiation belts. The belts are invisible doughnut-shaped areas ringing the equator above our atmosphere. 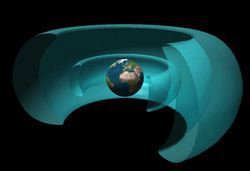 Left: Earth's magnetic field traps fast-moving charged particles within its invisible magnetic field. The particles are so numerous that they form into donut-shaped clouds with the Earth at the center, and stretch thousands of miles above Earth's surface above the equator. Credit: UCAR/Windows on the Universe

Killer electrons are found in the outer of the two belts. (Ions collect mostly in the inner belt and can also damage spacecraft.) The outer belt is highest above Earth at the equator, usually at an altitude of 13,000 to 19,000 km (8,000 to 12,000 miles), where many spacecraft are positioned. GPS (Global Positioning System) satellites are found there, for example. But intense solar activity can push it in much closer and impair even more satellites.

The Sun has both calm and stormy times much like our own changing weather, and we are affected by many of these changes. These effects on Earth's environment, such as magnetic storms, are called space weather. The solar activity that creates these storms - coronal mass ejections or flares directed toward Earth - is a major source of energy to electrons in the outer belt.

But particle clouds from coronal holes may be an even more important source. Coronal holes are regions from which high-speed streams of charged particles escape from the Sun through open magnetic field lines, mostly near the Sun's equator. Coronal holes generally increase as we approach the minimum in the 11-year solar cycle, often called the sunspot cycle, when the sunspot number is decreasing. The next minimum will be in 2006-2007. 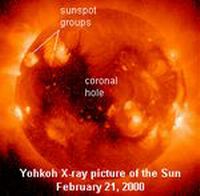 Right: This X-ray image of the Sun, captured on Feb 21, 2000, by the Japanese Yohkoh X-ray Observatory shows a coronal hole that sent high-speed solar wind particles toward Earth. The resulting gusts of solar wind struck Earth's magnetic field and triggered moderate geomagnetic disturbances over the next few days. Credit: NASA/ISAS

Because the amount and type of solar activity varies over time, the number of particles in the belts changes constantly over minutes, days, seasons, and the solar cycle. We see the largest numbers of killer electrons - sometimes a thousand times more - at the peak of a magnetic storm and in the following days. But scientists puzzle over the unpredictable response of the outer belt to magnetic storms: the number of electrons may increase, decrease, or not change at all.

Along with the Sun, Earth's upper atmosphere continuously supplies low-energy electrons to the outer belt. Scientists believe that the killers are created right there in the belt, when those low-energy particles are accelerated to high speeds and therefore high energy. We don't know what causes that acceleration, but powerful solar activity may energize the magnetosphere enough to do it. 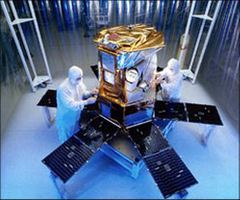 Left: Engineers work on the SORCE satellite, launched in 2003. Satellites need to be able to withstand a certain amount of radiation. Credit: NASA/LASP

What can we do about them?

The 2003 "Halloween storm", one of the strongest solar storms on record, temporarily shut down one Mars-bound spacecraft and permanently damaged instruments on two others. It also may have caused the complete loss of two orbiting Japanese satellites. We have a problem.

Since spacecraft systems can't be shielded from them, they have to be able to survive an "Attack of the Killer Electrons". To design this kind of tough system, engineers need to understand more about the radiation effects from these particle events than we do now. Scientists will be coordinating data from over a dozen current and future spacecraft in the magnetosphere. This will lead us to a better understanding of how killer electrons are accelerated, why the acceleration occurs when it does, and how the particles fade away after an event. There is a lot left to learn.

Read more on the Polar Mission

Additional information from our NOAA Partners