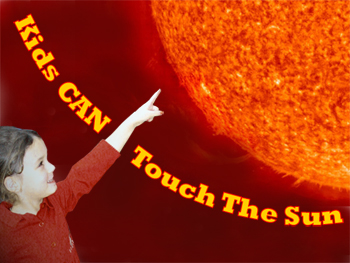 A new book, "Touch the Sun," allows blind and visually impaired students to experience images of the sun and solar activity by feeling transparent raised textures bonded to the pictures.

On December 2 at the National Federation of the Blind (NFB) in Baltimore, Md., NASA and the NFB will host an interactive opportunity for pre-selected blind students to explore the Sun through this new and exciting solar book.

The book features arresting images from the Solar and Heliospheric Observatory (SOHO) and the Transition Region and Coronal Explorer (TRACE) spacecraft, as well as a close-up of a sunspot from the National Solar Observatory at Sacramento Peak in the Lincoln National Forest, N.M.

"Invisible magnetic fields rule the violent solar activity that generates space weather," said Dr. Joseph Gurman, the U.S. project scientist for SOHO at NASA's Goddard Space Flight Center, Greenbelt, Md. "We are all blind to magnetic fields, so the visually impaired can be just as successful as the sighted in solar science," he explained. Gurman collaborated with Steele Hill, the SOHO imaging specialist at Goddard, to select the images and edit the scientific content.

The book was written by Noreen Grice, author of two other books featuring textured celestial images for the visually impaired: "Touch the Universe" and "Touch the Stars." "Touch the Sun" was funded by a partnership among NASA, the Lockheed Martin Corporation's Advanced Technology Center in Palo Alto, Calif., and the Stanford Solar Center, Stanford University, Stanford, Calif. 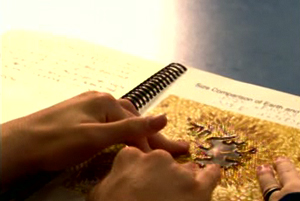 Approximately 2,500 copies will be printed. The majority will be distributed free to blind and visually impaired students, with the assistance of the National Organization of Parents of Blind Children, a division of the National Federation of the Blind. The remainder will be available for public purchase.

"Touch the Sun" brings exciting new discoveries in solar science to those who otherwise might not have a chance to participate," said Acting Director of Earth-Sun Systems, Dr. Richard Fisher at NASA Headquarters, Washington. "This is an integral part of what NASA hopes to accomplish with the new Vision for Space Exploration -- to share the thrill of exploring space with everyone," he explained.

"Our bright yellow star appears unchanging but in fact is an active, violent place that directly affects our home planet," Grice said. "'Touch the Sun' is a universally designed book for readers of all visual abilities. You can explore the sun with embossed color pictures of swirling gas currents, dark sunspots, curving magnetic fields and explosive eruptions," she said.

Raised patterns embossed over the colorful images in "Touch the Sun" translate shapes, places of solar and magnetic activity and other details of the sun and space weather, allowing visually impaired people to see with their fingertips what they cannot see with their eyes. It incorporates Braille and large-print descriptions for each of the book's 16 photographs, so it is accessible to readers of all visual abilities. 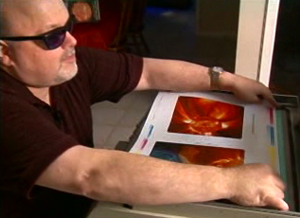 Image left: Robert Jaquiss of the View International Foundation produced the "Touch the Sun" book using real pictures from the SOHO mission and others. The book is a follow-up to Noreen Grice's "Touch the Universe" and is part of an overall effort to systematically engage blind youth in science and exploration by providing them with educational tools. Credit: View International Foundation/Robert Jaquiss.

Students at the Colorado School for the Deaf and Blind in Colorado Springs, Colo., evaluated each image for clarity and provided suggestions for improvement.

Gurman initiated "Touch the Sun" after he saw "Touch the Universe" presented at the June 2002 meeting of the American Astronomical Society in Albuquerque, N.M. "I realized solar science was a natural fit for a book like this, and our partners did as well. This was one of those rare projects where there was no resistance to the idea. Everyone who heard about it was enthusiastic," Gurman said.

+ Click here to view related images on the Internet