Grand Theft Pluto: New Horizons Gets a Boost From Jupiter Flyby
When New Horizons, NASA's Pluto-bound spacecraft, swings by Jupiter on Feb. 28th, it will pick up a few souvenirs along the way -- photos, data, and an extra 9000 miles per hour courtesy of the largest planet in our solar system. 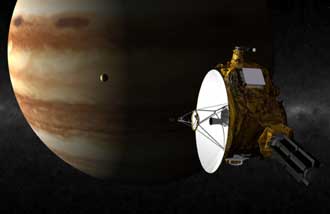 New Horizons is already the fastest spacecraft ever to leave Earth, but it needs even more speed to catch Pluto, which is receding from the sun. Winter is coming to Pluto, and researchers want New Horizons to arrive before Pluto's thin atmosphere freezes and falls to the ground. (It's so much easier to study an atmosphere when it's up in the air.)

So New Horizons is going to steal a little energy from Jupiter.

Image at right: An artist's concept of the Jupiter flyby. Credit: JHUAPL/SwRI

"It's called a gravity assist maneuver," says Dr. Robert Farquhar, formerly the New Horizons mission director at the Johns Hopkins University Applied Physics Laboratory. "New Horizons will dip into the gravity well of Jupiter and 'slingshot out' with more velocity than it had when it went in."

For New Horizons to speed up, of course, Jupiter must slow down. "That's conservation of energy," he says. But no one will notice. The change in Jupiter's orbit around the Sun due to the flyby is fantastically small. New Horizons will absorb about 1/1025 of Jupiter's orbital energy. That's like "taking a single drop out of the ocean," says Farquhar.

(1025 is 1 followed by 25 zeros. Coincidentally, there are about 1025 drops in the combined oceans of Earth, so Farquhar's analogy is correct.)

This insignificant loss for Jupiter amounts to a big boost for New Horizons. The piano-sized spacecraft will gain enough energy to exceed 52,000 mph -- fast enough to reach New York from Tokyo in less than eight minutes. New Horizons will reach the Pluto system in July 2015 -- five years earlier than without the Jupiter boost.

Long before space travel was possible, Farquhar said, astronomers saw the potential of using gravity to fuel space travel. "We've known about this since at least the nineteenth century," he said.

Jupiter is not the only helping hand in the solar system. Earth's gravity has donated its share of energy to ten different space vehicles, beginning in 1990. The first was Giotto, a European Space Agency mission to study Halley's Comet. Giotto launched in 1985, passed Halley's Comet in 1986, and in 1990 returned to Earth's orbit, where it picked up a gravity-assist boost and a redirection toward another comet, Grigg-Skjellerup, in 1992.

The most-recent spacecraft to fly by Earth was MESSENGER, NASA's Mercury-bound spacecraft. Short for "MErcury Surface, Space ENvironment, GEochemistry, and Ranging," MESSENGER launched on Aug. 3, 2004 and swung past Earth almost one year later in 2005. Along the way, it picked up an added boost, a redirection, and hundreds of stunning images of Earth.

Like MESSENGER, New Horizons will make the most of its flyby time. Through June, it will make more than 700 observations. This includes scans of Jupiter's turbulent, stormy atmosphere; a detailed survey of its ring system; and a detailed study of Jupiter's largest moons. The spacecraft also will take the first-ever trip down the long "tail" of Jupiter's magnetosphere, a wide stream of charged particles that extends tens of millions of miles beyond the planet, and the first close-up look at Red Spot Jr., a nascent storm south of Jupiter's famous Great Red Spot.

Later, after an eight-year cruise from Jupiter, New Horizons will conduct a five-month-long study of Pluto and its moons. Stay tuned!
› Back To Top