Image to right: The November 4, 2003 flare as seen by the Extreme ultraviolet Imaging Telescope on board the Solar and Heliospheric Observatory (SOHO) spacecraft. The flare is the bright, white region on the right side of the Sun. The horizontal streaks seen in the flare are not real; they are created when the flare's intense light overwhelms the detectors. Ultraviolet light emitted by hot gas in the atmosphere of the Sun is shown here in green (false color). Loop structures are streamers of electrified gas caught in the Sun’s magnetic field. + Print resolution still (1 MB) Credit: NASA and the European Space Agency

Solar flares are explosions in the Sun’s atmosphere caused by the sudden release of magnetic energy. Radiation from solar flares and from eruptions of electrified gas associated with them can damage satellites. They can also disrupt power systems and radio communications on Earth, and are hazardous to astronauts outside the protection of Earth’s magnetic field.

The November 4, 2003 flare was the most powerful ever recorded. X-rays from the flare overwhelmed the detectors on the National Oceanic and Atmospheric Administration's GOES-12 satellite, so scientists had to estimate how strong it was. They settled on a preliminary X28 rating, equivalent to billions of one-megaton nuclear bombs. 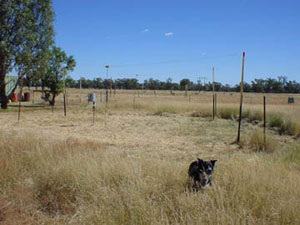 Image to left: The Radio Jove antennas deployed by Brodrick and his team. Brodrick’s dog “Cassie” strikes a pose in the foreground. She keeps him company when he moves the antennae around. Click image to enlarge. Credit: CSIRO, the Swinburne University of Technology, David Brodrick

“After looking at our data, we realized it was more likely an X40 flare,” said David Brodrick of the Commonwealth Scientific and Industrial Research Organization (CSIRO) Australia Telescope National Facility, Narrabri, Australia. “This is 70 percent more powerful than the original estimate. It was a staggering amount of energy – if it were possible to store for later use, it would have provided the energy in approximately ten thousand trillion barrels of oil, enough to supply the world for 340,000 years at current consumption.” Brodrick is lead author of a paper on this research published in the Journal of Geophysical Research September 9.

Brodrick and his team used a Radio Jove radio telescope kit to make their observations. The Radio Jove kits were developed for radio astronomy education from funding initially provided by NASA's Goddard Space Flight Center, Greenbelt, Md. The kit includes a radio receiver and an antenna, and sells for $155 plus shipping.

“Our Radio Jove receivers are the core of a radio telescope we call ‘Simple’ (because it's much simpler than the Australia Telescope Compact Array where I work). Tim Kennedy, our former Visitor's Centre manager, and I initially developed Simple as an after-hours hobby to help us learn about radio interferometry. I'm now using our Simple data as the basis for a Masters degree,” said Brodrick. "I periodically review the data to look for interesting phenomena and check the health of the system. At the time of the flare, Simple was running as a display in our public Visitor's Centre -- it just so happened that this display turned out a big science result of its own!”

"The seeds for this result were sown in the NASA Radio Jove project. It's a lesson that you don't always need expensive equipment to make a valuable contribution,” said Dr. Jim Thieman of NASA Goddard, who leads the Radio Jove program. 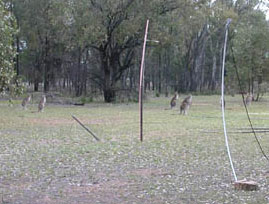 Image to left : Radio Jove antennae deployed as part of the “Simple” radio telescope, with a mob of Kangaroos grazing in the background. Click image to enlarge. + Print resolution still (500 Kb) Credit: CSIRO, the Swinburne University of Technology, David Brodrick

X-rays from solar flares will disturb the Earth’s upper atmosphere (ionosphere), causing it to partially absorb radio signals the radio telescope is observing. “Our team can estimate the power of a flare based on how much the radio signal is absorbed – maximum absorption occurs when the X-ray flare is at its strongest”, said Dr. Steven Tingay of the Swinburne University of Technology. “During large solar flares the Sun’s X-ray output will suddenly become thousands of times greater. The X-rays separate electrons from atoms in the ionosphere. The resulting flood of ‘free electrons’ in this region absorbs radio waves, and so our radio telescope sees a sudden drop in the amount of power we're detecting. We used our measurement of this ‘fadeout’ or ‘Sudden Ionospheric Disturbance’ to reconstruct the profile of the flare,” said Tingay. 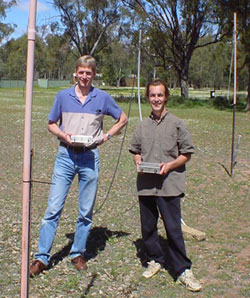 Image to right: Co-author Dr. Mark Wieringa (left) and David Brodrick (right) each holding one of the Radio Jove receivers used to make the observation, standing under one of the antennae. Click image to enlarge. Credit: CSIRO, the Swinburne University of Technology, David Brodrick

Two other teams made estimates of this flare. “Ours is not necessarily any more accurate, but our result is interesting because the other two estimates give conflicting results; one team says it was in the range X28-X40 and the other says X40-X50. As it turns out we get an answer that is in the middle of the other two, X34-X48,” said Dr. Mark Wieringa of the Australia Telescope National Facility.

“Our result contributes to the understanding of the flare because it is independent from these other estimates. Having independent estimates helps to give the solar scientists a better feel for how the flare really might have been,” added Brodrick. “It's a big win for us. It's rewarding to see something we initially developed as a hobby produce a historic result.”

This research was funded by the CSIRO, the Swinburne University of Technology, and private contributions.