Sunspot Creates a Stir; Auroras Likely
Beyond the winter chill that many of us have to contend with, there's also stormy space weather in the forecast for the week. 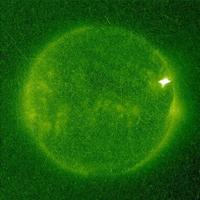 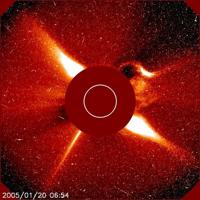 Image Left: This view of the Sun from the Solar and Heliospheric Observatory (SOHO) spacecraft shows a lot of the active regions including Thursday's highly energetic X-7 CME. Credit: NASA/ESA Image Right: Another of SOHO's instruments uses an artificial eclipse to block out the Sun so scientists can see the wispy solar corona, a key area for studying CMEs as they blast off the Sun. Credit: NASA/ESA.

A fast-growing sunspot group designated AR 10720 has been causing a stir as it sent a series of coronal mass ejections, or CMEs, hurtling through space at breakneck speed. The latest CME, a large X7.1, erupted on Thursday around 2 am ET. "One of the most flaring regions of the last few years," according to one scientist, the spot produced a total of 15 M-class and 5 X-class events (X being the highest designation).

Remarkably, scientists are also saying this event produced the highest energetic electrons since 1989; that storm toppled power grids in Canada. While this CME will probably not affect power grids, the higher energy rate does mean the radiation can penetrate spacecraft and other space systems more easily. Auroras from the blast are expected Friday night.

Image Above: Sunspot group AR 10720 formed as a smallish dot on Jan. 11 and grew to the size of Jupiter by Jan. 15. That's about the size of eight Earth's across! Credit: NASA/ESA/Tony Phillips.

In general, CME's ionized particles can interfere with power grids and satellite operations depending on the orientation of its magnetic field. If the field points south, the CME particles will interact with Earth's magnetosphere and likely disrupt electrical processes; if it points north, the magnetosphere should mostly shield the Earth from disruptions. Scientists will be unable to determine the orientation until the CME reaches the Advanced Composition Explorer (ACE) satellite in Earth orbit. This won't happen until only 15 minutes before the CME reaches Earth. 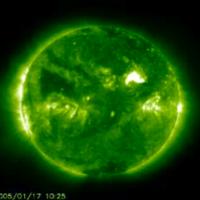 Dramatic solar activity is getting increasingly rare as we enter into the quiet period of the Sun's eleven-year cycle of activity. The years 2000-2001 marked the highest point of activity, but that doesn't preclude the occasional surprise like last week's CMEs and aurora. Even more significant were the intense solar storms that raged about a year ago.