Genesis Spacecraft on Final Lap
On May 1, NASA's Genesis mission passed another celestial milestone on its 37-month-long journey of discovery. The milestone, a flyby of Earth, put the intrepid spacecraft on track for a September 8 rendezvous over the Utah desert with a dramatic mid-air recovery of the capsule containing solar wind particles captured by the spacecraft. 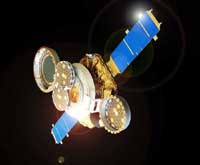 Launched in August of 2001, the mission set out to capture samples from the storehouse of 99 percent of all the material in our solar system -- the Sun -- and return them to Earth. Scientists expect the samples, collected on ultra-pure wafers of gold, sapphire, silicon and diamond, to provide vital information about the composition of the Sun and shed light on the origins of our solar system.

"Genesis has been way out there collecting samples from space for a long time," said Genesis Project Manager Don Sweetnam of NASA's Jet Propulsion Laboratory, Pasadena, Calif. "This weekend, we brushed past Earth at an altitude of 386,000 kilometers (239,849 miles) above the planet's surface, just beyond the Moon's orbit. On September 6, we will again approach Earth at lunar distance, but this time we are going to come on in carrying NASA's first samples from space since Apollo 17 carried the last Moon rocks back in December of 1972." 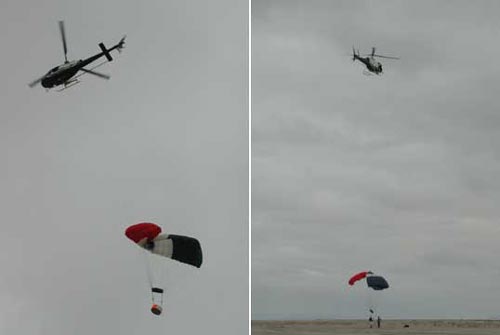 Image above: The Genesis team performed mid-air retrieval training last month at the Utah Test and Training Range. On Sept. 8, over the same training range, one of two helicopters will capture the Genesis sample return capsule in mid-air and land it gently on the ground where a ground crew will disconnect the parafoil. Then, the helicopter will carry the capsule back to a nearby airfield for preliminary handling. Image credit: NASA/JPL.

Genesis, the first mission to collect particles of solar wind, flew past Earth at 6 a.m. EDT, Saturday, May 1, at a speed relative to Earth of 1.26 kilometers per second (2,800 miles per hour). The mission's navigators designed this unique trajectory so that the spacecraft would reenter Earth's atmosphere in daylight. This plan sets the stage for a dramatic daylight mid-air retrieval by two flight crews piloting helicopters dangling the aerospace equivalent of big fish hooks. The flight crews assigned for the capture and return of Genesis are comprised of engineers, former military aviators and Hollywood stunt pilots.

The Genesis mission is NASA's first sample return mission since the last Apollo mission, and the first ever to return material collected beyond the Moon. Additional information about Genesis is available at http://www.jpl.nasa.gov/genesis/.