Exploring Europa by Way of the Arctic
This summer, a science team set out on a two-week expedition of Earth's own little version of Jupiter's moon Europa -- the Borup Fiord Pass at Ellesmere Island, a place hidden high above the rest of the world in the Canadian High Arctic. 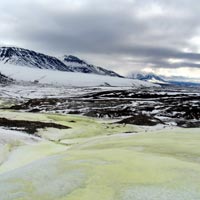 Ellesmere Island's sulfur-rich springs leave large, telltale yellow stains on the surface, comparable to those observed on Europa. The team conducted on-site experiments, gathering samples in near-freezing temperatures to find out what the stains on Borup Fiord could tell them about this unique environment. To do this, they had to study the geology, biology and chemistry of the sulfur-rich springs. While the whole team had a part in seeing how closely Borup Fiord corresponds to Europa, this responsibility fell mainly on Gleeson, a University of Colorado grad student who was doing field work for her Ph.D. 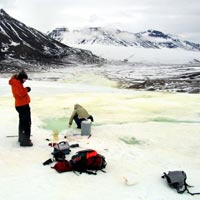 "We can't figure out where exactly the sulfur is from," Gleeson said, and until they can do further tests, the team must wait to see why this sulfur is surfacing in such abundance. In the meantime, Gleeson and Pappalardo have come closer to understanding this unusual environment from what they know about sulfur. The observed forms of sulfur are "an unusual chemical combination," says Pappalardo. If regular geology was involved, all that should be found is gypsum, an oxidized form of sulfur.

Gleeson explains, "Finding so much sulfur is the clue that there's a continuous supply of it being produced, otherwise it would have become gypsum." Pappalardo says that while scientists might expect to find gypsum, other forms of sulfur exist there, such as hydrogen sulfide (its smell is often compared to that of rotten eggs) and native sulfur, which he describes as the plain and purest form of sulfur. 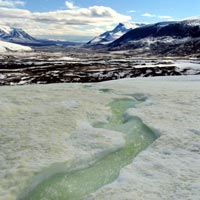 "It's out of the norm," Pappalardo says. "Biology is expected to play a part in this. The fact that all [these forms of sulfur] were present in close proximity suggests that life is involved." While Pappalardo acknowledges that Europa's outer surface contains too much radiation to ever support life, these findings could help answer the question as to whether life could exist below the surface of Europa. Further research can also help us to better understand how best to make future spacecraft observations of Europa.

Partial funding was provided by The Planetary Society, whose members are excited to see what this piece of Arctic land can tell us about Jupiter's moon.

While on the excursion, which occurred earlier in the summer than it had in past years, the team also found the sulfur-rich springs may have been active during the winter. Gleeson states the sulfur layers were there during the winter months, but were simply covered by snowfall. The team realized that the later in the season they go, the more the spring water is going to be diluted when combined with melting snow. If they were to go in spring, they now suspect that the water would be much less diluted and they would be able to tell if the springs were active at that point, as well.

On a future excursion, Pappalardo would like to bring out equipment and instruments to detect microbial activity on the island's subsurface similar to the types of instruments that one day might be used at Europa.