Setting Our Sights on the Moon: Unique NASA Science Lab Tackles 'Sticky' Issue of Lunar Dust
In the safety-conscious, science-driven business of aerospace research, where laboratories routinely are set up as "clean rooms," in which sterility is paramount, Dr. Mian Abbas' lab is something of an anomaly. The word "dust" is even in its name.

Not that the "Dusty Plasma Lab," part of the National Space Science and Technology Center in Huntsville, Ala., is any less well maintained than any other professional research facility -- the dust found here is unique for another reason. It comes from Earth's Moon.

That dust -- currently a single vial's worth, barely a teaspoon full -- is the focus of a vital study to help NASA send American explorers back to the Moon in coming decades. 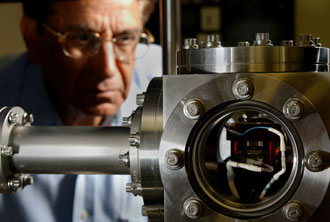 Image at right: Dr. Mian Abbas, a space science researcher at NASA's Marshall Space Flight Center in Huntsville, Ala., watches as a single grain of lunar dust -- taken from the Moon during the Apollo missions of the late 1960s -- is isolated in a vacuum chamber. Image credit: NASA/MSFC

Since April, Abbas, a space scientist at NASA's Marshall Space Flight Center in Huntsville, has been using a volleyball-sized vacuum chamber in the Dusty Plasma Lab to simulate the Moon's airless environment. With his partners, Marshall astrophysicist Dr. Paul Craven and Dragana Tankosic, a doctoral student in physics at the University of Alabama in Huntsville, Abbas is suspending grains of lunar dust, one at a time, in a vacuum in the chamber.

The team bombards each grain -- part of a sample scooped up in 1972 by astronauts during the Apollo 17 Moon mission -- with ultraviolet radiation. This gives each particle an electrostatic charge, similar to the charge a person acquires when walking across a heavy carpet in wool socks. Abbas and his partners study how dust grains in the lunar environment are charged and how they discharge, shedding their charge the way touching a metal door in a carpeted room can give a person a brief, tingling shock.

The goal for Abbas and his team is to log the physical characteristics and behavior of dust grains ranging in size from 2 microns to 20 microns -- the particle sizes most likely to cause problems during long-term Moon missions. How big is 20 microns? Look at the period at the end of this sentence -- it's just shy of 400 microns in diameter.

"Working with such tiny particles is a test of patience," Abbas acknowledged, smiling. "But we have much to learn about the properties and behavior of lunar dust if we hope to conduct long-term or even permanent science-oriented operations on the Moon." 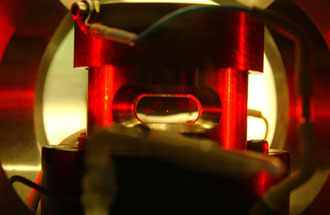 That powdery dust, the by-product of fearsome meteor storms that pounded the Moon for eons, coats much of the lunar surface. So how can such minuscule motes of dust pose any threat? Big trouble comes in little packages, Abbas said. Imagine what a build-up of dust might do to sensitive machinery and mechanical equipment here on Earth -- from vehicle engines to air filtration systems -- without proper protection.

Long-term science missions on the Moon may be no different. As the Apollo astronauts discovered, lunar dust clings to everything, from gloves and boots to vehicles. The crew of Apollo 17 even reported sighting "streamers" of low-lying dust gliding across the surface despite the Moon's airlessness -- a phenomenon that raised new questions not just about why the dust sticks to things, but also why it is levitated and transported, sometimes across great distances.

Scientists surmise the carpet of lunar dust must be electrostatically charged by incidents of high ultraviolet solar radiation and by the solar wind -- charged particles constantly flowing outward from the Sun. When strong ultraviolet radiation hits the Moon's "day side," the half that faces the Sun, it knocks electrons out of atoms in the lunar soil. This action creates a positive charge in countless dust specks, which immediately begin to repel one another, the way two identically charged magnets react in close proximity. Charged dust, scientists theorize, is pushed upward, often rising hundreds of feet in a phenomenon dubbed "fountaining." The particles then discharge, sink back to the surface and the cycle starts again. On the Moon's "night side," the solar wind has the same effect, but instead of creating positively charged atoms, it makes negatively charged ones. The particles there behave identically, repelling one another and fountaining until they discharge and fall back.

To date, no lunar landing mission has stayed on the surface long enough for the dust to pose a real concern. "But for future long-duration missions, we obviously need to pursue dust abatement and mitigation strategies," Abbas said. "We need to ensure sensitive equipment, vehicles and spacesuits are protected."

There's more at risk than machinery. Earlier this year, astrobiologists at NASA's Ames Research Center in Moffett Field, Calif., conducted laboratory studies that suggest lunar dust could pose human health threats if inhaled. The dust motes aren't poisonous, but unlike dust particles on Earth, which are buffed and rounded by atmospheric friction and interaction with the elements, lunar dust remains coarse and jagged. If inhaled -- when astronauts track the dust back into their pressurized landers or flight vehicles -- the particles can embed themselves in the lungs like burrs, and cannot be easily expelled. The potential result? Long-term ailments similar to silicosis, a debilitating respiratory illness typically contracted by stonecutters, quarry workers and others exposed to freshly ground-up or blasted rock.

Lunar dust research is expected to continue into 2007 and beyond, Abbas said, noting that the work is vital to overcoming problems associated with lunar dust -- a critical step in realizing the Vision for Space Exploration, NASA's mission to return human explorers to the Moon and enable human exploration of the Solar System.

"We are making unprecedented observations and developing mathematical models for the behavior of these dust particles," he says. "Not only will this research enable NASA, academia and industry to learn to efficiently remove accumulated dust, but in time it could lead to manufacturing and engineering advances such as dust-repellent clothing, hardware and building materials."

Advances, no doubt, that will leave those pesky lunar particles in the dust.

For more information about research at the Dusty Plasma Lab and the National Space Science and Technology Center, visit: