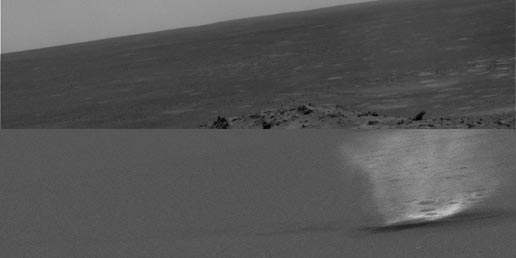 This movie clip shows a dust devil scooting across a plain inside Gusev Crater on Mars as seen from the NASA rover Spirit's hillside vantage point during the rover's 456th martian day, or sol (April 15, 2005). The individual images were taken about 20 seconds apart by Spirit's navigation camera. Each frame in this movie has the raw image on the top half and a processed version in the lower half that enhances contrast and removes stationary objects, producing an image that is uniformly gray except for features that change from frame to frame.

The movie results from a new way of watching for dust devils, which are whirlwinds that hoist dust from the surface into the air. Spirit began seeing dust devils in isolated images in March 2005. At first, the rover team relied on luck. It might catch a dust devil in an image or it might miss by a few minutes. Using the new detection strategy, the rover takes a series of 21 images. Spirit sends a few of them to Earth, as well as little thumbnail images of all of them. Team members use the 3 big images and all the small images to decide whether the additional big images have dust devils. For this movie, they specifically told Spirit to send back frames that they knew had dust devils.

Scientists expected dust devils since before Spirit landed. The landing area inside Gusev Crater is filled with dark streaks left behind when dust devils pick dust up from an area. It is also filled with bright "hollows", which are dust-filled miniature craters. Dust covers most of the terrain. Winds flow into and out of Gusev crater every day. The Sun heats the surface so that the surface is warm to the touch even though the atmosphere at 2 meters (6 feet) above the surface would be chilly. That temperature contrast causes convection. Mixing the dust, winds, and convection should trigger dust devils.

Scientists will use the images to study several things. Tracking the dust devils tells which way the wind blows at different times of day. Statistics on the size of typical dust devils will help with estimates of how much dust they pump into the atmosphere every day. By watching individual dust devils change as they go over more-dusty and less-dusty terrain, researchers can learn about the turbulent motion near the surface. Ultimately, that motion of wind and dust near the surface relates these small dust devils with Mars' large dust storms.