A Bright Comet Is Coming 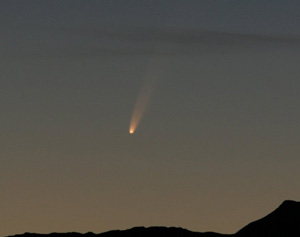 If you watch the morning or evening sky these days and have a clear view of the horizon, you will be able to spot a bright object with a prominent tail.

Instructions for viewing the comet in the morning from Spaceweather.com:

Instructions for viewing the comet in the evening fromSpaceweather.com:

That object is comet C/2006 P1 (Comet McNaught). It was discovered on August 7th, 2006 by the hugely successful comet discoverer Rob McNaught. At time of discovery, the comet was a very faint object, but the predicted perihelion distance (closest distance to the sun) of just 0.17 astronomical units (the average distance between the Earth and sun, about 150 million kilometers) indicated that the object has the potential to become very bright indeed. Nobody really knows just what this comet will look like at its closest point to the sun and that is where SOHO comes in! The LASCO instrument aboard SOHO has the ability to watch comets as they get extremely close to the sun. Fortunately for us, C/2006 P1 is going to pass right through the LASCO C3 field of view in less than a weeks' time! As soon as SOHO's cameras capture the comet, we will post images and further information to the SOHO website. In the meantime, you may enjoy looking at some photographs and checking out the links below for further information. 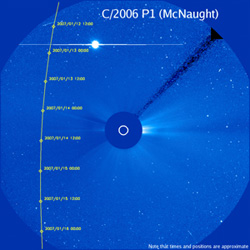 The image to the left shows the expected track of the comet through SOHO's coronagraph LASCO C3. The comet will appear in the field of view of C3 at around 10:00 UT (05:00 EDT) on January 12th (a few hours before perihelion) in the upper-left of the images and travel almost vertically down, exiting C3's field of view in the lower left at roughly 03:00 UT on January 16th.

Recent estimates of the comet's maximal brightness have ranged widely from magnitude +2.1 (about as bright as Polaris, the North Star) to a super-bright -8.8 (about 40 times brighter than Venus)! The lower the magnitude number, the brighter the object. The brightest stars in the sky are categorized as zero or first magnitude. Negative magnitudes are reserved for the most brilliant objects: the brightest star is Sirius (-1.4); the full Moon is -12.7; the Sun is -26.7.

Current estimates put comet McNaught at magnitude 0 to -1, and it is still brightening. It could be -2 or -3 by the time it reaches LASCO's field of view. This means it will be brighter than comet NEAT or comet 96P/Machholz. In other words, this could be the brightest and most spectacular comet that SOHO has ever seen!