Catching this week's comet is as easy as flipping the switch on your computer. As of today, a comet is visible within the live images sent back from a spacecraft stationed one million miles away. You can be a part of the action in real-time by downloading the Solar Media Viewer or checking the SOHO web site. 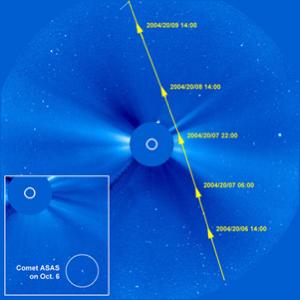 The comet is currently about 10 million miles away from the Sun, whose light makes it impossible to observe it from Earth. This makes the Solar and Heliospheric Observatory (SOHO) satellite the only way to see the big event. Its unique perch out in space means that it has the ability to see what "nobody else in the world can," according to Dr. Bernhard Fleck, the ESA Project Scientist.

Image to right: Projected path of comet ASAS as seen by SOHO. The LASCO camera creates an artificial eclipse to block out the Sun (the center circle). By blocking out the disk, scientists can study the Sun's outer atmosphere, or corona. Credit: NASA/ESA

Named ASAS (C/2004 R2), the comet ranks among the brightest in recent times. Scientists clue each other in on the brilliance of comets by attaching a number to it. A score of zero means it's visible from Earth. Negative numbers denote less impressive comets and positive numbers signify that they are dazzling. Scientists speculate that ASAS will have a magnitude of 4.

Grzegorz Pojmanski of the Warsaw Astronomical Observatory in Poland discovered ASAS less than a month ago while remotely using a small telescope in Chile. A part of the All Sky Automated Survey, that telescope is generally focused on studying stars, but comets are often discovered at the same time.

Usually referred to as "dirty snowballs," a comet's center consists of ice and dust. Scientists believe comets originate in the Oort cloud, located beyond Neptune and are potentially as old as the solar system, making them intensely interesting. As they get closer to the Sun, the heat melts the ice, making the comets outgas, creating the look of a tail.

The SOHO spacecraft has spotted about 850 comets so far.